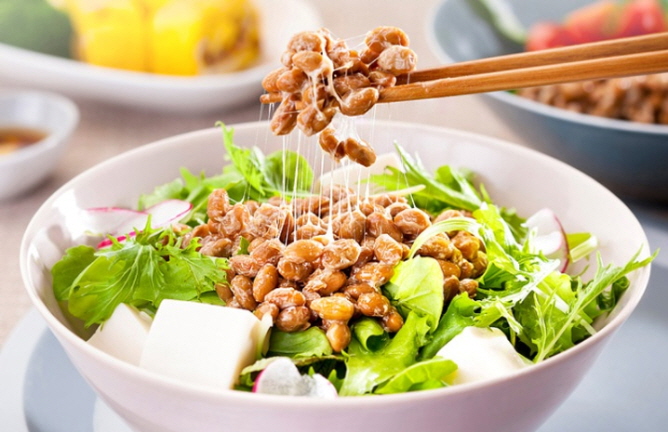 The retail market for natto in Korea is expected to grow in the future as the volume of natto produced in South Korea increases along with imported natto from Japan.(image: Pulmuone Co.)

According to a recent study conducted by the Korea Agro-Fisheries & Food Trade Corporation, the market for cheonggukjang in South Korea was 93.5 billion won (US$8.08 million) last year, down 5.2 percent from 2016.

The change is seen as the result of the younger generation’s preference for natto, which can be mixed with salad and other dishes.

Furthermore, the retail market for natto in Korea is expected to grow in the future as the volume of natto produced in South Korea increases along with imported natto from Japan.

Natto from Japan exported to the Korean market was worth over 100 million yen (US$915,280) last year. South Korea is the second-largest export market for Japanese natto following the U.S.

The problem is that it is difficult to grow the market for cheonggukjang even on a policy basis.

Cheonggukjang is expected to be included in the system of “fit-for-living” businesses that have increased entry barriers, although the designation of them as “small and medium-sized enterprises” has been a failure.

This will limit the entry of large companies and their business expansion.

Conglomerates are developing products that can eliminate the smell of cheonggukjang to help consumers enjoy food in line with the recent health-conscious trend, but such efforts will be difficult to sustain in the future if they are designated as “fit-for-living” businesses.

“As young people prefer natto over cheonggukjang, and the market is regulated, food giants are focusing on natto rather than cheonggukjang,” an industry source said.