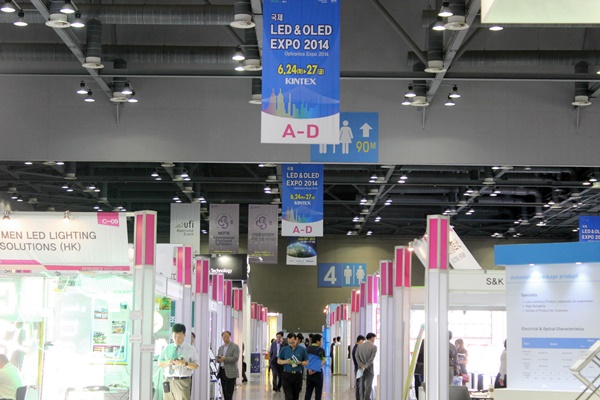 Domestic and international related people were present at the opening ceremony. Kim Jae-Hong, vice minister for industry and technology of MOTIE, gave the inaugural speech and stressed, “Industry of LED and OLED helps energy reduction as an eco-friendly industry, it became a promising industry in the world.”

The 12th exhibition will continued until the 27th (Fri.) for four days ranging from LED/OLED lightings, equipment, and components to association with 600 booths of 260 companies from 13 countries. Showing the status of the LED industry today, the show will help to secure global competitiveness with export consulting sessions, Global lighting Association and international LED/OLED conferences.

With mercury light regulations after incandescent lamp regulations, LED lighting is fostered to replace fluorescent light as well as the traditional incandescent light market. The fluorescent light regulation will raise the LED permeability rate into the market even more. SNE Research adjusted the rate of market permeation prospect from 68% to 82% in 2020. While this positive prospect of LED is shown, ‘International LED & OLED EXPO 2014′ explores LED & OLED technology intensively.

The LED industry is representative of new leading business as well as eco-friendly industry through integration of industries, and ‘International LED & OLED EXPO 2014′ has been acknowledged as the biggest LED show in Korea.