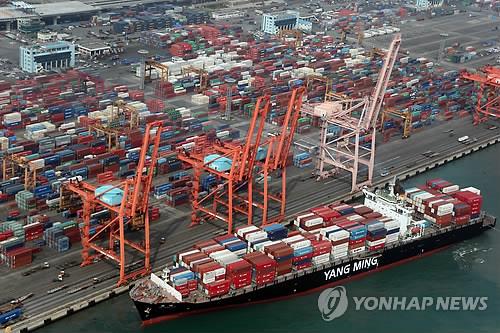 The country’s exports reached US$268.7 billion in the first six months of the year, down 5.1 percent from a year earlier, while imports fell 15.6 percent on-year to $222.4 billion, according to the data compiled by the Korea Customs Service.

As a result, South Korea posted a 10.1 percent drop in total trade volume of $491.1 billion for the January-June period, marking the lowest level since the second half of 2010.

If the pace continues until the end of the year, the annual trade is expected to hover around $980 billion, sinking below the $1 trillion line for the first time since 2010.

South Korea’s trade has been on a steady rise since it first exceeded the $1 trillion line in 2010, with the amount growing to a record $1.1 trillion in 2014.

Economists said a protracted slump in the world economy, coupled with the Korean won’s appreciation and downbeat crude oil prices, have dragged down the country’s exports, the key driving engine of South Korea’s economy.

The Seoul government and think tanks forecast that South Korea will see a decline both in its 2015 exports and imports from a year earlier due to the negative external factors.

The Ministry of Strategy and Finance said in June that outbound and inbound shipments for this year are projected to slip 1.5 percent and 7 percent on-year, respectively, with the total trade volume reaching $1.05 trillion.

The Bank of Korea expected the country’s 2015 exports to fall 4.3 percent, while the state-run Korea Institute for Industrial Economics & Trade (KIET) predicts the figures will drop 3.1 percent by the end of 2015.

“Sluggish exports are stemming from one-off factors like a slowdown in Europe and China, a sharp drop in crude oil prices and the weakening Japanese yen and euro, and also from systemic factors of a downside cycle of world trade and the Chinese economy and overseas relocation of production bases by local businesses,” said Min Sung-hwan, a researcher from KIET.