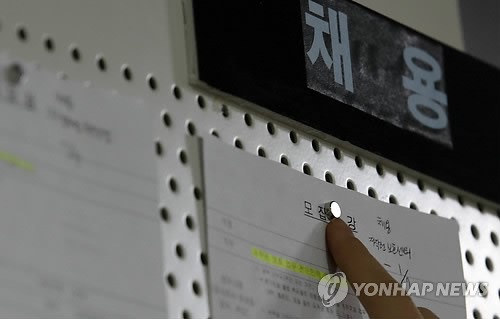 One of five South Koreans start their career with temporary jobs with a contract period of less than a year. (image: Yonhap)

Some 761,000 workers between the ages of 15 and 29, or 19.5 percent of all workers in the age segment, who started working last year were employed as temporary workers whose contract expires in less than one year, according to the data by Statistics Korea.

It marks a nearly twofold increase in the portion of those who start their career in unstable jobs compared with 11.2 percent in 2008. The figure has been trending higher in recent years, hovering in the 20-percent level since 2011.

In the same period, the portion of those who found jobs with contracts longer than one year halved to 3.1 percent from 6.4 percent.

The data also showed that 34.8 percent of the total had temporary posts as their first job, reflecting worsening job security for the younger generation.

The overall job market has also been worsening for the youth group. The unemployment rate in the cited age segment reached 9 percent last year, rising 1 percentage point from the previous year and hitting the highest since 1999, when South Korea suffered from an Asian financial crisis.