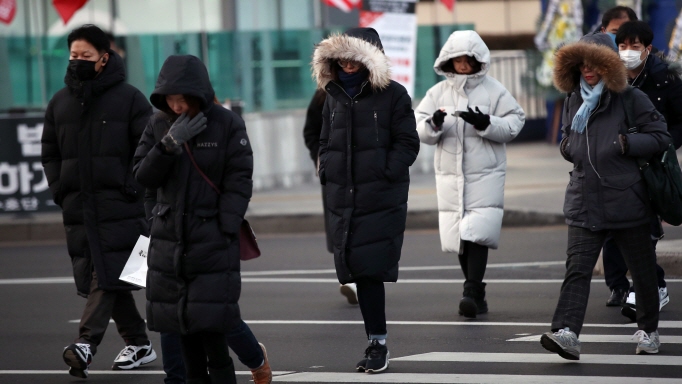 SEOUL, Dec. 28 (Korea Bizwire) — The coldest weather yet this winter hit South Korea on Friday, with temperatures dipping below minus 10C in many parts of the country.

The Korea Meteorological Administration (KMA) issued a cold wave alert for much of the northeastern province of Gangwon, where the mercury fell as low as minus 23.5C in mountainous areas.

Temperatures in the province’s Cheorwon, Daegwallyeong, Chuncheon and Wonju plunged to minus 23.4C, minus 18.9C, minus 15.4C and minus 12.5C, respectively.

The mercury dropped to minus 13.7C in the capital Seoul, with the KMA estimating wind chill temperature at minus 20C.

Gyeonggi Province cities and towns that surround Seoul registered temperatures ranging from minus 19.1C to minus 14.1.

The weather administration forecast Seoul’s daily high to remain below 4C on Friday. It said the cold spell is expected to continue through this weekend.

Temperatures are generally higher in the nation’s southern regions and Jeju Island, where the mercury stood at between minus 5C and 0.8C, but snow fell or will fall there later in the day.

Jeju Island had received 8.2 centimeters of snow as of 9 a.m., while a heavy snowfall watch was issued for coastal areas of the central province of South Chungcheong and the southwestern Jeolla provinces.

In Busan, the southern port city, the temperature dropped to minus 7.1C, with its wind chill temperate estimated at minus 13.7C.

As the freezing temperatures have lasted for a few days, citizens in Seoul went to work in thick winter jackets. Except for commuters, there was a noticeable drop in pedestrians on streets, while few people went out for walks in urban parks.

Merchants and restaurant owners complained about lower sales and fewer customers due to the cold wave.

“I wore my thickest winter clothes after checking weather forecast last night but still feel cold,” a citizen said while waiting for a bus in downtown Seoul.