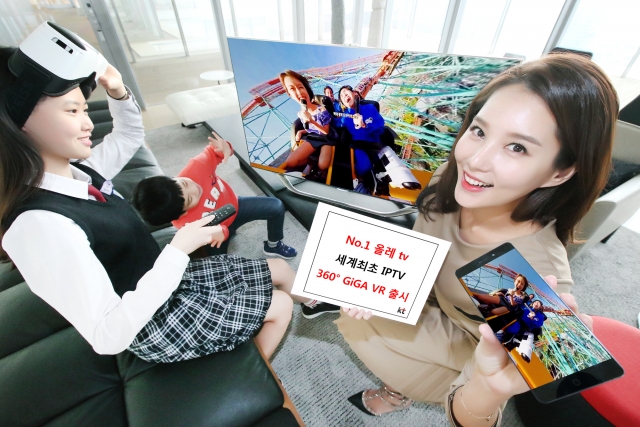 “Viewers can enjoy VR content through a TV screen without having to bear the inconvenience of wearing a VR device.” (image: KT)

According KT, the service is offered for select VOD programs in full HD, for which viewers can use their TV remote controller for a 360-degree visual experience as well as zoom in and out of the scenes. The service is offered free of charge for all Olleh GiGA UHD TV subscribers, and it is compatible via a VR device on smartphones as well.

“Viewers can enjoy VR content through a TV screen without having to bear the inconvenience of wearing a VR device,” said a KT official.

For the time being, VR programs offered include the U.S. episode of Infinite Challenge, a variety entertainment program; a behind-the-scenes episode from the drama Shopaholic Louis; and a special episode from singing competition program King of Mask Singer.

Meanwhile, KT plans to operate what it calls a “Nado GiGA VR Producer” academy for college students starting at the end of November, which will offer a professional mentoring service on VR content production, from planning to filming.

“It is our goal to establish a VR ecosystem by providing opportunities for easy and fun ways to enjoy VR content, and spearhead a more widespread use of VR,” said Yoo Hee-kwan, head of KT’s media business division.