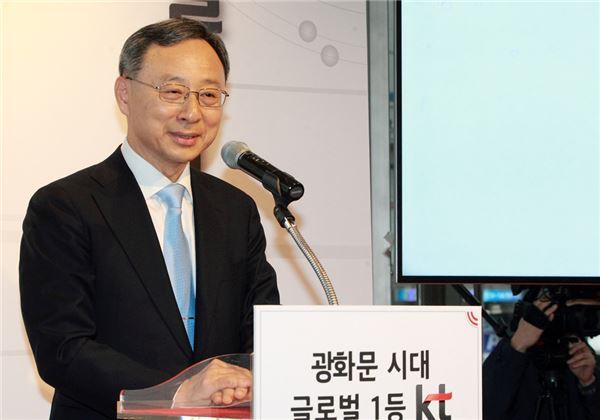 Under the plan, KT will establish the Intelligent GiGA Infra, which connects the latest technologies, including cloud computing and big data. (image: KT)

Under the plan, KT will establish the Intelligent GiGA Infra, which connects the latest technologies, including cloud computing and big data.

The announcement of the massive investment plan coincides with the 130th anniversary of KT, which started out as a state telegram organization in 1885.

KT said the fourth industrial revolution can be defined as a trend led by information communication technology (ICT).

The company has been making efforts to roll out various ICT-based services, adding such businesses will result in annual sales of 5 trillion won by 2020.

In line with the vision, the company also showcased the Wiz Stick, a mobile security platform that can prevent access to malicious websites and block hacking attempts.

KT said it plans to post 1 trillion won in security solutions sales in 2020 and also tap the overseas security market, which is estimated at around 285 trillion won.

Other areas of focus include smart energy, automatic cars and genetic analysis technologies that makes use of ICT.

The company, which boasted a long-term evolution (LTE) technology with a speed of 1 gigabytes per second (Gbps), added it plans to expand the speed to 20 Gbps by 2018.

“As Japan emerged as the leading electronics player after introducing the world’s first color satellite broadcast, South Korea will lead the global ICT industry after the 2018 Winter Olympics by showcasing our convergence services,” the company added.