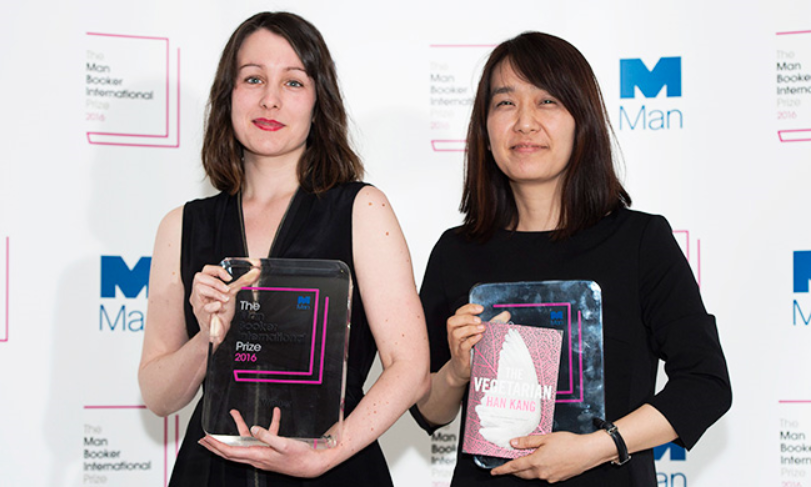 Han Kang (R) and translator Deborah Smith as they pose for a photograph with the book ‘The Vegetarian’. (image: Yonhap)

SEOUL, May 19 (Korea Bizwire) – Ever since Korean novelist Hang Kang received the world-renowned Man Booker international literary award, attention has been growing in literary circles as to which Korean novelists will carry on the globalization of Korean literature.

Various domestic novelists are being introduced to overseas countries one by one due to the effects of ‘Hallyu’, a term referring to the global propagation of Korean popular culture. Since local literary critics and readers are responding well to Korea’s literary works as of late, expectations are higher than ever before that Korean literature will grow to greater heights.

Last March, representatives from South Korea attended the Paris Book Fair held in France for the first time in history, providing them with the opportunity to verify the current place Korean literature and novelists occupy on the world stage.

The Korean novelists who received the most attention at the event were Sok Young Hwang, Seung Yoo Lee and Young Ha Kim. Their lectures were so popular that it was reported not a single empty seat could be found.

Many of Hwang’s (age 73) major works such as “Mr. Han’s Chronicle”, “On the Road to Sampo”, “The Guest”, “The Ancient Garden”, and “Simcheong, The Lotus Path” were introduced at the book fair, garnering Hwang a comparison to Émile François Zola by literary critics. Hwang’s “The Guest” had been a first round candidate for France’s Prix Fémina global literary award in 2004.

Novelist Lee (age 57), whose novels focus on the relationship between God and man, is reported to be even more famous than Hwang in France. His works such as “The Private Life of Plants” and “The Room with a Bathtub”, published around 10 years ago, still continue to be steady sellers up to this day. In 2000, his novel “The Reverse Side of Life” was a finalist in the foreign literature category of the Prix Fémina award.

Several critics have pointed out, however, that Korean literature’s position in global literary circles is still in its infancy, and that a long road remains for Korean novelists to receive world-renowned awards. Critics say that what is most alarming is the recent decline in the number of domestic readers.

The opinion of many onlookers is that for domestic novelists to rise to the level of being considered for world-renowned literary awards, an environment that fosters novelists’ growth is just as necessary as each novelist’s own personal growth.

“Korean literature has power on the global literary stage only when our own Korean readers first read and give much attention to the literary works,” said KL Management representative Gu Yong Lee. “Literary works that were received well at home are not easily overlooked in markets overseas.”