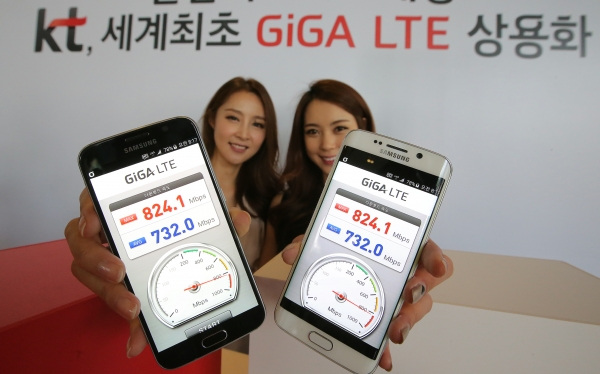 The Giga-LTE service can achieve a peak speed of 1.17 gigabytes per second (Gbps), 15 times faster than existing long-term evolution (LTE) and four times faster than the 3-band carrier aggregation (CA), which refers to the latest 4G technology that has combined three different frequencies, KT said.

That means a user will typically be able to download an 18 GB ultra high-definition (UHD) movie in about 126 seconds and 100 music files that amount to about 3 GBs within 21 seconds, the mobile carrier added.

The new network service will first be offered to Samsung Galaxy S6 or S6 Edge users starting this week and gradually be expanded to other smartphones. Users can upgrade their mobile network to the Giga-LTE via a free firmware, it said.

The Giga-LTE provides such a high speed because it uses LTE and Wi-Fi networks at the same time, accelerating its maximum speed, according to KT. The mobile carrier has been working with Samsung Electronics Co. since last September to co-develop the high-speed network.

South Korean mobile carriers have been eager to take leadership in the commercialization of 3-band CA technology, which is considered a prior phase to the next-generation 5G network.

SK Telecom, the largest mobile carrier in the country, announced early last month that it had succeeded in using the LTE and Wi-Fi networks together and will soon be ready for commercialization.