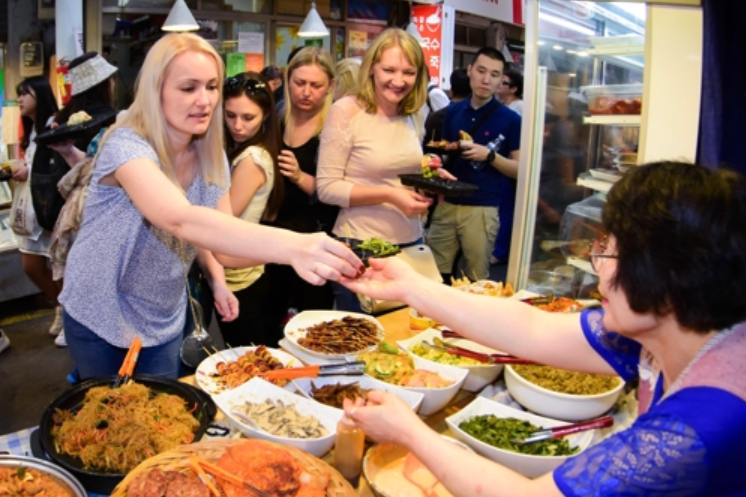 A foreign travel agency official from Russia pays for her food at Tongin Market, a traditional night market, in central Seoul on May 26, 2017. (image: Yonhap)

SEOUL, May 29 (Korea Bizwire) – Dozens of foreigners gathered in Seoul on Friday for a special venue designed by the state tourism agency to bolster the country’s sagging tourism sector, as the country is grappling with a steep fall in Chinese visitors.

The fair is part of the KTO’s two-week-long promotion campaign that runs through early next month, in which a total of 200 industry experts and businessmen from overseas will be visiting tourist hot spots in the metropolitan and rural areas.

Friday’s session highlighted new destinations that can offer a mixture of festivities and traditions that can impart the country’s unique culture to visitors. The participants were taken to theaters and traditional markets earlier as part of the tour, the KTO said.

“We have about 550 different festivals nationwide and we plan to put an emphasis on them to attract tourists going forward,” Joung Jin-su, KTO director of the strategic products team, said. “It’s a long shot considering that festivals are hard to commercialize unless they’re well-known like the Edinburgh Festival in England, but we have many seasonal festivals that can offer a new cultural experience that is difficult to find in other countries.”

The event reflects South Korea’s aggressive pitch to restore momentum in its tourism sector reeling from a dearth of Chinese visitors that had made up the bulk of the country’s inbound tourists.

The tally of Chinese travelers more than halved in April from a year earlier, after China restricted travel to South Korea from mid-March in protest of the deployment of a U.S. anti-missile system, or THAAD, on the Korean Peninsula.

South Korea’s tourism is facing a double-whammy as Japanese visitors have also shunned coming to Seoul amid a more belligerent North Korea, which carried out a series of missile tests over the past two months.

“We had many cancellations for May due to geopolitical concerns,” Mouri Maiko, a Japanese travel agent from Osaka who attended the KTO session, said.

Such a plight has prodded the tourism industry to rethink their market strategy. A departure from China has since become a fresh goal, prompting the government and industry to bolster marketing and bilateral exchanges with Japan, Southeast Asia and Russia in an effort to diversify the portfolio of visitors.

The government also pledged to improve the quality of tourism by devising more novel tour content for foreigners that will help change the country’s image as a place for “cheap shopping.”

“Russians have a very good image about South Korea for its highly advanced IT and medical services. Having been to the theater today, I think the performing arts will be an item that can really appeal to us,” said Tatiana Garmash, a travel agency official from Yakutia, a Russian federal district in the far east.

According to the KTO, the number of Russian tourists grew more than 20 percent last year from a year ago.

The KTO also plans to bolster tourism marketing for sporting events ahead of the PyeongChang Winter Olympic Games slated for February next year, while continuing to promote traditional cuisine and filming sites of popular Korean dramas to revive tourism, Joung said.