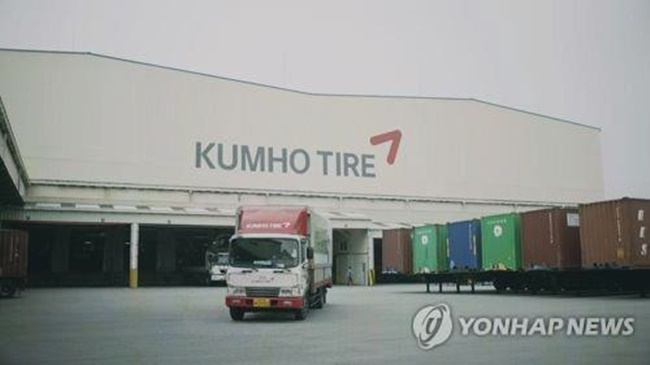 In a message sent to employees, Kumho Tire Chairman and Chief Executive Kim Jong-ho said the company “has no reasons to object” to the main creditor Korea Development Bank’s (KDB) plan to turn over the debt-ridden company to China’s Qingdao Doublestar Co. (Image: Yonhap)

SEOUL, March 7 (Korea Bizwire) – The chief of Kumho Tire Co. said Wednesday that foreign acquisition of the financially troubled tiremaker is essential for its survival at this juncture despite objections raised by union workers.

In a message sent to employees, Kumho Tire Chairman and Chief Executive Kim Jong-ho said the company “has no reasons to object” to the main creditor Korea Development Bank’s (KDB) plan to turn over the debt-ridden company to China’s Qingdao Doublestar Co.

The move could allow a turnaround for the company through fresh investment in facilities, products and technologies.

To avoid any massive layoffs and seek the company’s long-term prosperity, the chairman said the tiremaker will ask creditors to sell it to a foreign company that is willing to invest in the fields mentioned above and that does not want to lay off workers.

But he urged the union to make concessions to help the company present a revised self-help program that can be accepted by the KDB. The policy lender will hold the next round of talks with Doublestar to sell the tiremaker based on the revised self-rescue plan, he explained.

In recent talks with Doublestar, the KDB reached the conclusion that selling Kumho Tire to the Chinese tiremaker is the “most reasonable alternative” to help creditors suffer fewer losses from their investments in the tiremaker.

In its proposal, Doublestar said it will invest 646.3 billion won (US$599 million) in Kumho Tire’s new shares, which would allow the Chinese tiremaker to become the biggest shareholder with a stake of 45 percent.

If the rights issue is successful, KDB-led creditors will collectively own a 23.1 percent stake in Kumho Tire.

On top of the capital injection into Kumho Tire’s new shares, Doublestar said it will invest 200 billion won in the tiremaker’s production facilities while guaranteeing job security for existing union workers for three years.

Under the potential deal, which requires the cooperation of the union and the government’s approval, Doublestar and creditors are prohibited from selling their stakes in Kumho Tire for three and five years, respectively, after the management transfer.

Creditors asked the union to decide on whether to accept Doublestar’s investment proposals by the end of March. If the union refuses to accept the offer, the tiremaker will have to be placed under a court receivership.

Kumho Tire’s going concern value stands at 460 billion won, which falls far short of the firm’s liquidation value of 1 trillion won, according to an accounting firm’s due diligence on it.