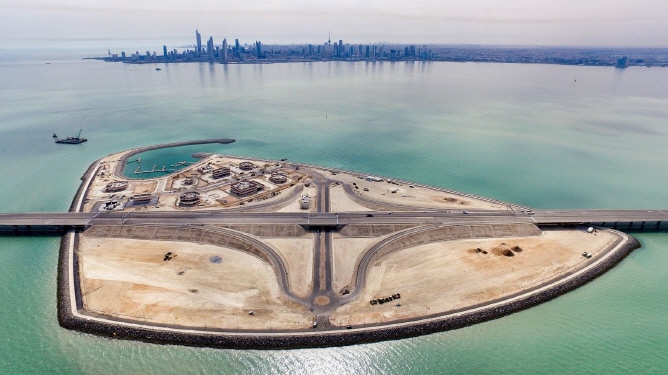 This photo, released by Hyundai Engineering & Construction Co. on May 2, 2019, shows the Sheikh Jaber Al-Ahmad Causeway, a 48.6-kilometer-long bridge across Kuwait Bay that the South Korean builder dedicated the previous day.

SEOUL, April 10 (Korea Bizwire) — Kuwait has granted entry ban exemptions to over 100 employees of 25 South Korean companies after government and parliamentary leaders appealed to the Middle Eastern nation that bilateral economic cooperation must be kept up despite the coronavirus pandemic, an official said.

It is the first time that Kuwait has allowed such exemptions to the entry restrictions it has enforced since February to block any inflow of COVID-19 from overseas.

The companies, including Hyundai Engineering & Construction Co., arranged a special Kuwait Airways flight to transport a total of 106 people, including their employees and technicians, who will work on a series of major business projects in Kuwait.

The flight is set to arrive at Incheon International Airport, west of Seoul, at 5:45 a.m. Saturday, carrying some 225 South Korean citizens who have sought to return home from a coronavirus-hit Kuwait.

Two hours later, the flight will depart for Kuwait with the 106 corporate workers.

Before departing, the workers will take coronavirus tests. Upon arriving, they will undergo another test and have to comply with a 14-day quarantine program.

“It is meaningful that Kuwait granted the exemptions despite its sweeping entry ban,” the official told reporters on condition of anonymity.

Seoul has been ramping up its efforts to persuade foreign countries to allow essential overseas trips by businesspeople, stressing responses to the COVID-19 pandemic should not cause unnecessary barriers to international movement and trade.