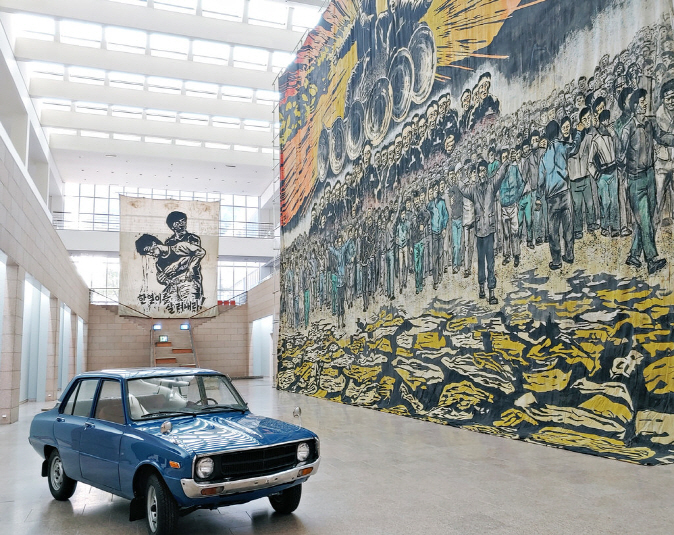 An exhibition room at the National Museum of Modern and Contemporary Art in Gwacheon for its exhibition “The Square.” (Yonhap)

SEOUL, Oct. 16 (Korea Bizwire) — What started as a humble national art museum with a four-person staff in the backyard of the Gyeongbok royal palace in central Seoul in 1969 has grown into arguably the biggest art space in Asia half a century later.

Now in possession of more than 8,000 art pieces, the one and only South Korean national art museum, the National Museum of Modern and Contemporary Art (MMCA), marks its 50th anniversary this month.

To celebrate the half-century artistic journey that witnessed South Korea’s break-neck economic growth as well as its turbulent democratization, the MMCA will this week launch an ambitious exhibition project to chronicle South Korea’s modern history through representative artworks and visual records.

Under the project, titled “The Square: Art and Society in Korea 1900-2019,” the MMCA’s three museum locations — the headquarters in Gwacheon, just south of Seoul, and two in central Seoul — will simultaneously host special exhibitions, according to the museum.

“This exhibition fully captures the story of how Korean art has responded to the turbulent history of modern Korea in the 20th century,” MMCA Director Yun Bum-mo said in a press conference Wednesday.

“It is the first MMCA project to cover the three art museums … and we tried to present the wild history of the 20th century through key artworks,” he said.

The exhibition has three parts.

One part, to open on Thursday at the MMCA’s Deoksu Palace branch, encompasses Korean history in the first 50 years of the 20th century, when Korea was annexed and colonized by Japan and later emancipated from Japanese occupation.

The Deoksu Palace exhibition will capture South Korean painters and independence fighters’ patriotic efforts to safeguard the nation through more than 300 paintings and other records by Chae Yong-shin, Oh Se-chang, An Jung-sik and many other established artists.

The period also includes works by Kim Whan-ki, one of the most globally renowned modern Korean painters. 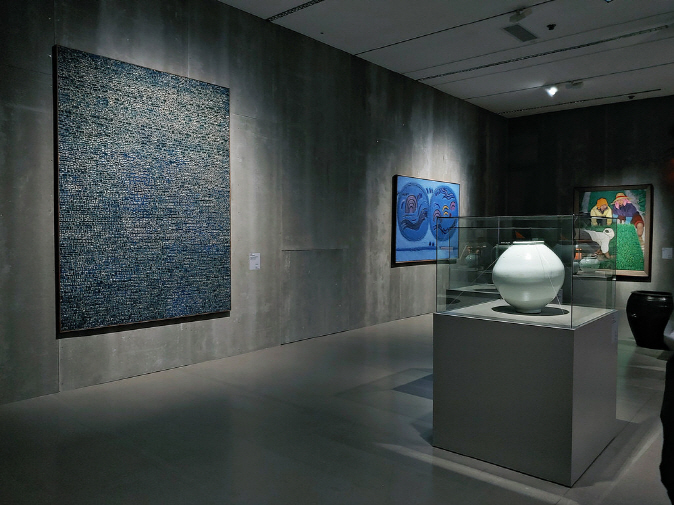 Paintings by Kim Whan-ki on display at the National Museum of Modern and Contemporary Art in Gwacheon for its exhibition “The Square.” (Yonhap)

The second part — to kick off on Thursday in Gwacheon — walks visitors through the period from 1950-2019.

A whirlwind of global headline-grabbing events hit the country during this unusually turbulent period in Korean history, including the 1950-53 Korean War, historically speedy economic growth, a massive democratization struggle in the 1980s, the country’s hosting of the 1988 Summer Olympics and the county’s major economic setback in the 1997 Asian financial crisis.

This exhibition will feature paintings by some of the most famous Korean modern painters such as Kim Whan-ki, Park Su-geun, Lee Jung-seob and Yi Eung-ro.

Including their paintings and sculptures, 500 artworks and records will be put on display at the Gwacheon museum.

The third part, which began on Sept. 7 at the MMCA’s Seoul museum near the presidential office Cheong Wa Dae, will deal with local and global social issues of today’s Korea such as refugees and political rallies.

The exhibition will, in addition to Korean artists, encompass progressive art projects by creators from outside Korea, including Eric Baudelaire and Nalini Malani.

The Seoul exhibition is accompanied by a special publication project bringing together seven young Korean writers to produce a short story under the shared title “The Square.”

“‘The Square’ exhibition will be a landmark show to highlight Korean modern and contemporary historic events that have heated up ‘the square’ (the public sphere) and the artworks that captured them,” Director Yun noted.

The exhibitions at the Deoksu Palace and Seoul museums will run till Feb. 9, while the Gwacheon exhibition will end on March 29.

Tickets for the three parts of the exhibition are 6,000 won (US$5), if bought in a package. A free shuttle bus service linking the three museums is available four times a day.