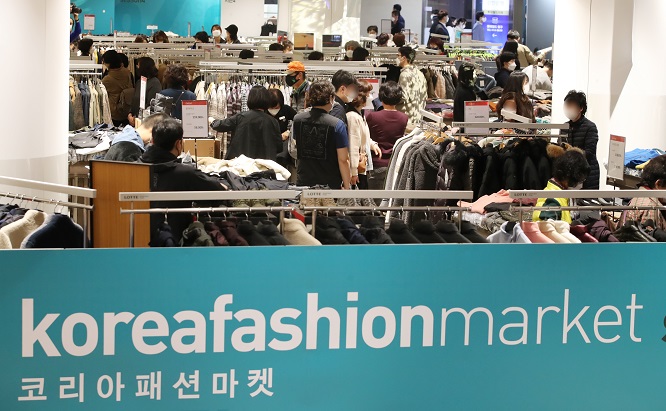 The Ministry of Trade, Industry and Energy said 2,053 companies will offer big bargains both online and in stores during the Korea Sale Festa — the Korean equivalent of Black Friday — that will run through Nov. 15.

This year’s run is the largest since the event was launched in 2016, according to the ministry.

The central and 17 local governments also prepared various vouchers and promotion events to encourage shoppers to open their wallets as the country is trying to shore up private spending to maintain growth.

Tech giants, such as Samsung Electronics Co. and LG Electronics Co., are offering discounts of up to 40 percent on TVs, refrigerators and several other items.

Fashion brands are offering up to 80 percent discounts on various products, while hundreds of cosmetic firms, furniture makers and food companies are offering various deals.

Department stores, major e-commerce sites, convenience stores and other retailers also came up with various events and deals to lure customers, according to the ministry. 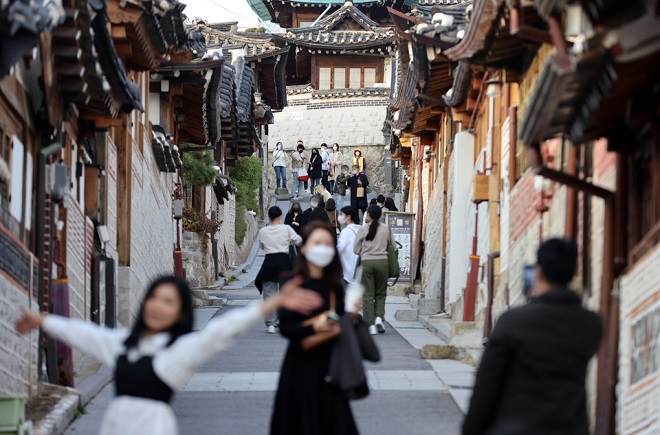 People walk on a street in Bukchon Hanok Village in Seoul’s Jongno district on Oct. 31, 2021, one day after the country launched its “living with COVID-19″ plan. (Yonhap)

The festival is taking place as domestic demand has been dented by the coronavirus pandemic.

In the third quarter, private spending fell 0.3 percent from three months earlier, compared with a 3.6 percent on-quarter gain in the second quarter, according to the Bank of Korea.

Economic growth also slowed during the July-September period despite robust exports due mainly to weak private consumption, sparking concerns that the country would miss its 4.2 percent growth target for the year.

The festival also coincided with the start of the first phase of the country’s “living with COVID-19″ plan marked by eased social distancing rules.

On Monday, South Korea began to gradually phase out toughened antivirus restrictions, under which COVID-19 will be treated as an infectious respiratory disease, like seasonal influenza.

“The event comes at a time there is a need for warm consumption that will be a boost to both buyers and sellers,” Prime Minister Kim Boo-kyum said Sunday after taking part in a ceremony to mark the event’s opening.

“I hope that the shopping festival will serve as the first step forward for an economic recovery for everyday people.”