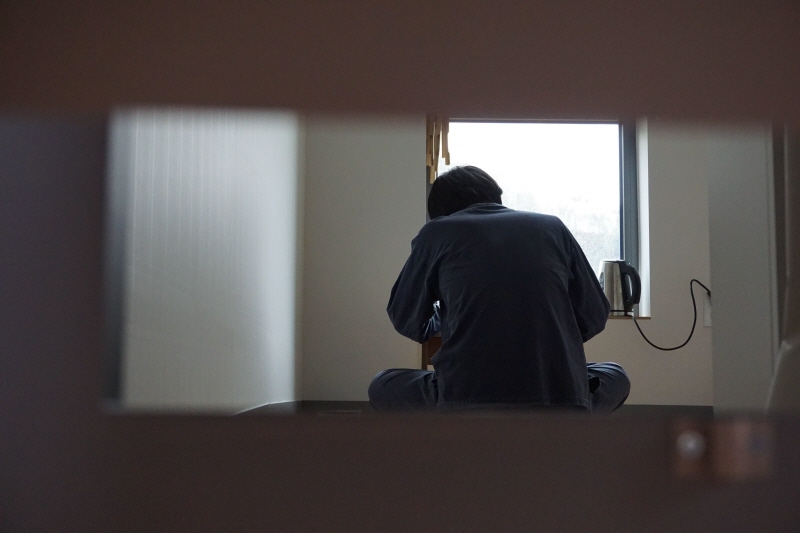 A Prison Stay guest taken from outside the window of a solitary confinement cell in the facility located in Hongchoen, some 102 km east of Seoul. (image: Happitory)

SEOUL, Aug. 17 (Korea Bizwire) — Cho Eun-kyung, 34, living in Seoul, is determined to lock herself up in a prison cell before this summer ends.

It doesn’t mean she’s going to do anything bad or illegal. She will drive about 102 kilometers east to Hongcheon County in Gangwon Province, where she will be idling away two nights of her summer break in Prison Stay.

Prison Stay is a meditation program run by Happitory, a Seoul-based non-profit foundation. A guest can spend up to 48 hours in solitary confinement in the lodge. There are 28 such rooms, each about 5.62 square-meters in size, in a modern-style facility built with big piers at bottom.

A guest is required to wear blue prison garb and given a pen and notepad only. Anything else is strictly off-limits. Daily meals, which may awfully be vegetarian to some, are provided three times a day, just like an inmate, according to Happitory.

“I got so tempted by the solitary room, that you’re really alone in there, with no cellphone, or whatever gadgets that haunt you every minute of your day,” said Cho, who’s worked in the IT field for almost 10 years.

Cho is one of many South Koreans who increasingly opt for voluntary isolation during vacation, which usually lasts about a week here.

Incheon and Gimpo airports are packed with individuals and groups scrambling to get out of the country, on a getaway to a fancy resort in Kota Kinabalu or a tightly scheduled tour to “conquer Europe.” But those on the other side of the spectrum are just as driven by the will to simply “do nothing.”

“Mung Stay” is another venue that has gained traction among those wishing to stay languid. This particular accommodation, located in Chungju, 147 km southeast of the capital, allows visitors to wear a “silence badge.” They must stay speechless in the state of “mung,” meaning spacing out or being in a daze. No one in the lodge is allowed to communicate with the badge-bearer.

Among the perhaps more “ordinary” idle vacationing is what is being described here as “Staycation” — a coined word combining stay and vacation. Those up for long hours of real idleness book an overnight stay at a downtown hotel, where they indulge in tranquility and no outside disturbance. The only trouble they need to take is some scrolling-down and a few clicks on HotelsCombined or other rival sites to make the booking.

Major hotel chains here have been busy this summer churning out luxury packages at promotion prices to woo such guests, mostly from younger generations such as singles or families with young kids, according to the hotel industry.

Others choose to be stuck in a cartoon cafe, which is nothing like a coffee shop with books on a few shelves for free reading. It is as spacious as a library and as cozy as a hotel. Lounging on a big couch, a customer is served drinks and snacks, and can take a nap or stay for the whole day.

“I’m fed up with this whole idea of ‘planning for holidays.’ It’s so self-contradictory when you come to think of it, you know, that you make dire efforts to rest,” said Kim Tae-ho, a 33-year-old office worker in Seoul, who plans to spend part of his summer vacation at a cartoon cafe burying his face in comics. “Not to mention, these holiday plans never quite work out to be relaxing after all.”

Lee Taek-gwang, a professor of Global Communications at Kyung Hee University, said it mirrors many of us just wanting time alone away from the world swamped by social networking.

“The endless mobile messaging and SNS posting constantly ask us to prove who we are and what we’re doing,” he said. “It is a way of severing that overwhelming connection.”

A recent survey by platform operator SK Planet Co. showed that 57.3 percent of 1,026 respondents aged between 20 to 50 said they want to “take a break” in their vacation time on top of anything else, slightly outpacing those who were planning a trip.

Of the surveyed, 42 percent said they want “refreshment for mind and body”, trumping the 30.8 percent who said they are seeking entertainment. 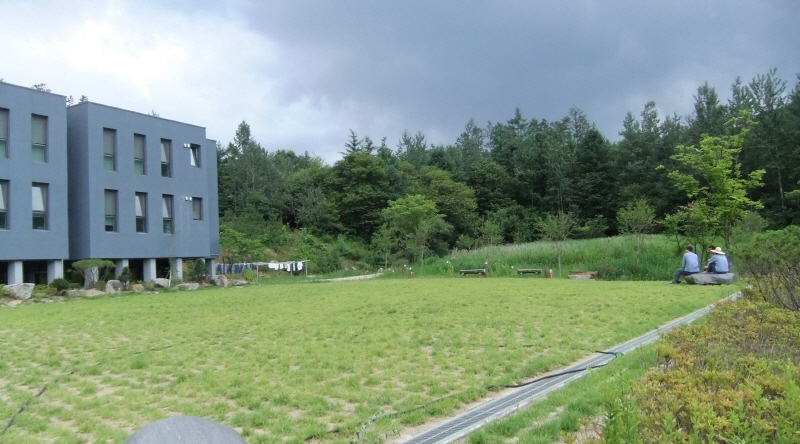 Bae Eun-jeong, an official from Happitory, noted there has been far greater reception for Prison Stay this year than they had for the past few years since the program was first launched in 2013.

“We see this as demand is growing for not only the relaxation programs but also one that gives the chance for soul-searching in solitude,” she said.

Lee pointed out the growing demand for “do-nothing vacationing” reflects a tendency that people no longer consider doing things alone strange or awkward. Like how “eating and drinking alone” has taken root as a New Normal in a society that has seen a steep rise in the number of single-person households.

“You’ve got to be physically engaged in some activities if you’re vacationing in a group,” he said. “The desire to run away from stifling daily life has created a general consensus that it’s better off being on your own or with your family, and do nothing special. We’re beginning to take this for granted.”

Bae said she remembers the words from one of her guests before she left the lodge that has lingered on her mind for some time.

“She said ‘I thought I’d come to a prison when I arrived (here). But now I feel like I’m going back to the real prison.’”