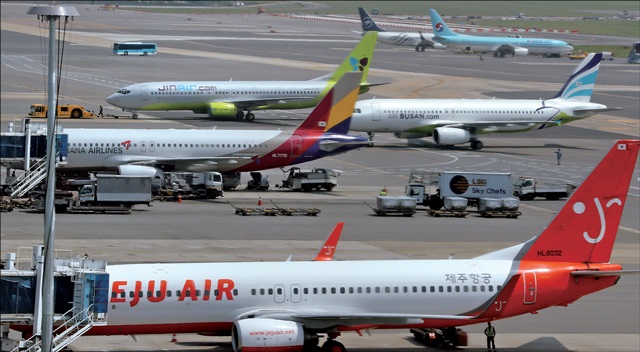 SEOUL, May 3 (Korea Bizwire) — South Korea has granted low-cost carriers (LCCs) rights to sharply increase the number of their flights on much sought-after routes to China, heralding stiffer competition with full-service rivals.

The Ministry of Land, Infrastructure and Transport decided Thursday to allow budget carriers to operate an additional 118 flights on 30 new routes to China per week, while giving full-service carriers 21 more flights on eight routes.

The ministry said its air traffic review committee made the decision in line with a Seoul-Beijing agreement to expand bilateral flights at their aviation talks in mid-March.

The pact calls for raising the number of air routes between the neighbors to 66 from the previous 57 and expanding weekly flights to 588 from 449.

A ministry official said airlines will be able to start flights on newly granted routes in several months.

“Carriers, which were granted fresh traffic rights, will likely begin flights in three to four months after obtaining necessary licenses and making other preparations,” he said.

The additional flights are expected to help meet ever-growing demand for air traffic between the countries and induce more Chinese to visit South Korea, the official added.

According to the ministry, two LCCs — Jeju Air Co. and T’way Air — have been allowed to newly serve on the crown-jewel route between Beijing and Incheon International Airport, the main gateway to South Korea.

Korean Air Lines and Asiana Airlines have also been granted permission to operate an additional four and three weekly flights on the route, respectively.

Eastar Jet has been given the right to operate seven weekly flights on the much-coveted Incheon-Shanghai route. Currently, Korean Air Lines and Asiana Airlines each run 21 flights on the route per week.

LCCs have also been allowed to newly serve 14 out of the 44 routes dominated by full-service carriers.

The ministry expected the latest move to give air travelers more diverse flight schedules and help reduce airfare on routes to China.

In a press release shortly after the decision, Jeju Air said customers will be able to travel to China “at cheap prices,” vowing to boost the convenience of air travelers by starting flights as early as possible.

Currently, LLC airfare on Chinese routes amount to 70 percent to 80 percent of those charged by full-service airlines.

According to government data, passenger traffic on Chinese routes stood at 4.14 million in the first quarter of this year, up 14 percent from a year earlier.