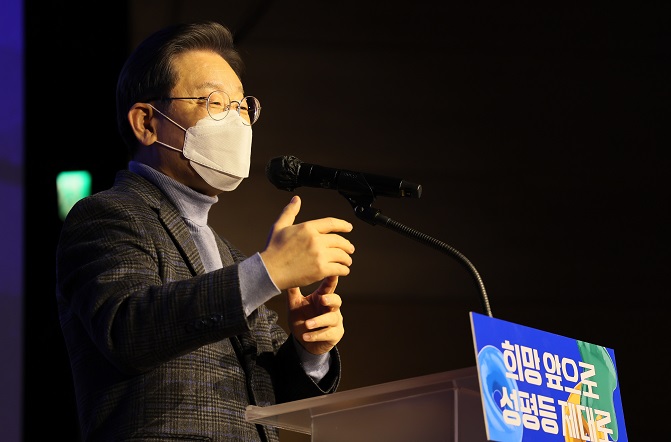 Lee of the Democratic Party made the remarks in a meeting with heads of the nation’s four major cryptocurrency exchanges and industry experts in Seoul, apparently targeting voters in their 20s and 30s who have a relatively strong interest in virtual asset investments.

Lee said he will prepare objective listing standards and make the disclosure system transparent through the legalization of virtual assets. He also promised to monitor unfair trade practices and devise protection regulations to cope with the digital divide.

Lee said he will consider allowing initial coin offerings after establishing sufficient safeguards to protect investors and prevent market disturbances. The candidate said he will also consider permitting the issuance of security tokens based on real assets.

“An existing market doesn’t disappear even if our eyes are covered,” Lee said, referring to the virtual asset industry. “If we cannot avoid it, we have to get ahead,” he said.

In a separate campaign event with senior citizens, Lee said he, if elected president, will pay an annual pension of 1.2 million won (US$1,000) to people age 60 and older until the payment of their public pensions begins.

The pledge is intended to help ease the financial burden of those aged 60 and over who have retired but have not reached the age at which they begin to receive a public pension.

Lee also promised to increase the number of jobs for seniors from the current 800,000 to 1.4 million by the end of his term.