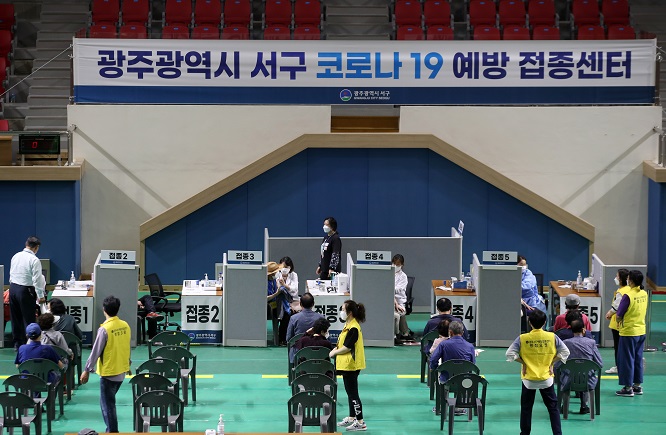 Citizens wait to receive COVID-19 vaccines at an inoculation center in Gwangju, 329 kilometers south of Seoul, on May 24, 2021. (Yonhap)

SEOUL, May 26 (Korea Bizwire) — Coronavirus vaccines left over after people do not show up for inoculations will be available for anyone who wants to get vaccinated via online reservations starting later this week, health authorities said Wednesday.

Starting on Thursday, people will be able to sign up to get the leftover doses through the country’s major internet portal Naver and top mobile messenger KakaoTalk, the Korea Disease Control and Prevention Agency (KDCA) said.

People can search for the number of available COVID-19 vaccines nearby and make reservations to get inoculated with such “no-show” doses at medical facilities.

Medical facilities, including neighborhood clinics and general hospitals with leftover vaccines, will upload the necessary information, the KDCA said.

The program will be on a trial for two weeks and will officially kick off on June 9, the authorities said.

Younger people, who are not yet officially eligible to receive shots as part of the nationwide inoculation plan, can sign up to receive the surplus doses.

However, the leftover doses will not be available to anyone who has already had the first shot of the two-dose regimen or if they are under the age of 30, the authorities said.

Health authorities have ramped up the inoculation campaign, which aims to inoculate 13 million people by the end of June and achieve herd immunity by November.

The country has secured enough shots to fully vaccinate 99 million people, more than enough to vaccinate its entire population, including doses from the COVAX Facility project.

South Korea has completed the inoculation of 1.9 million people, or 3.8 percent of the country’s 52 million population.