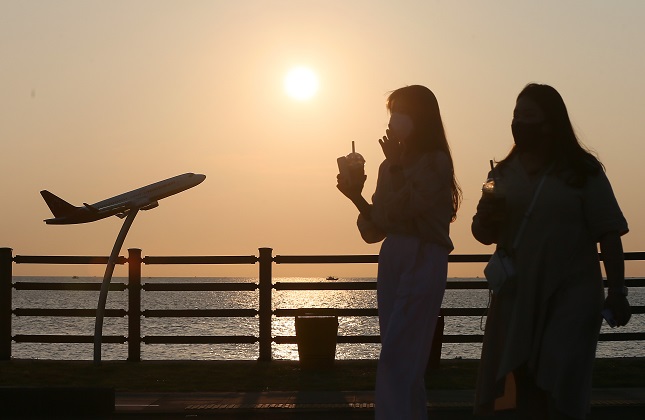 This Aug. 18, 2021, file photo shows two women standing on a beach deck on the southern resort island of Jeju. (Yonhap)

SEOUL, Sept. 8 (Korea Bizwire) — Preference for traveling to less crowded or outdoor destinations has grown this year in South Korea amid the ongoing coronavirus pandemic, a report showed Wednesday.

The Korea Culture & Tourism Institute (KCT) compared two surveys — one conducted on 2,061 people from April to May last year and the other conducted on 3,136 from May to June this year — to study any change in domestic travel trend that could be attributed to COVID-19.

The report showed more people have chosen to travel to less populated destinations at 65.5 percent this year, up 7.1 percentage points from 58.4 percent last year.

Preference for outdoor trips also increased to 44.8 percent from 37.4 percent over the same period.

Last year, people preferred “contactless” trips, where they do not have to come into contact with others, but this year, the trend shifted towards trips to places with fewer people, a KCTI researcher said.

According to the report, a smaller number of respondents went on scenic drives this year at 23.6 percent, down from 51.6 percent last year. The rate of those who took one-day or near-home destination trips also fell from 51.3 percent to 43.9 percent.

The report also showed a growing number of Koreans were planning for domestic travel this year at 53 percent, up 4.2 percentage points from 45.8 percent tallied last year.

The respondents were asked to choose multiple answers for reasons why they plan for domestic travel.

Almost 70 percent said they do so because it is safe as long as they maintani social distancing rules. More than 83 percent, in fact, said they complied with such rules while traveling.

Feeling bored at home during the weekends and holidays was also cited as the second biggest reason for planning such a trip at 54.1 percent.