Operating income came to 901.2 billion won (US$638.1 million) in the July-September period, compared with 727.2 billion won the previous year, the South Korean chemical company said in a regulatory filing.

The earnings beat market expectations. The average estimate of net profit by analysts stood at 585.4 billion won, according to a survey by Yonhap Infomax, the financial data firm of Yonhap News Agency.

“Although deterioration in the petrochemical market due to the global economic slowdown had an impact on profitability, we achieved solid results with sales growth in new growth engines like advanced materials and energy solutions,” LG Chem CFO Cha Dong-seok said.

The advanced materials segment, including components for secondary batteries, posted 2.58 trillion won in sales, more than doubling from the 1.16 trillion won a year earlier. Operating profit grew more than eightfold to 415.8 billion won in the third quarter.

LG Chem is building a new cathode factory in the southeastern industrial city of Gumi, aiming to boost production capacity to 60,000 tons by 2025.

LG Chem set up a joint venture with Huayou, a Chinese mining company, to produce cathode materials, such as nickel, cobalt manganese and aluminum. 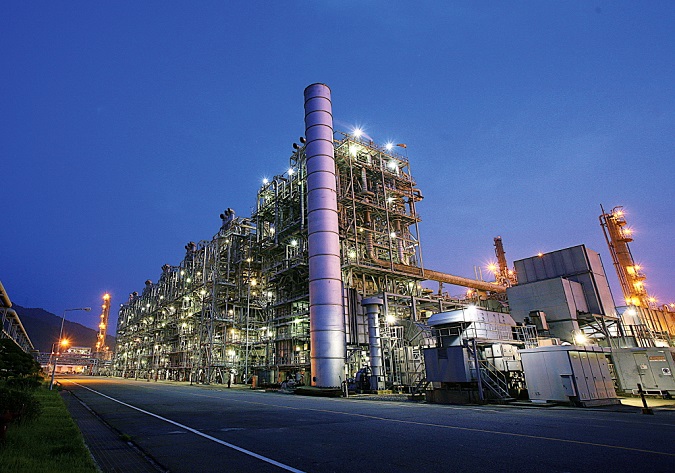 LG Chem Ltd.’s chemical factory in Seosan, South Chungcheong Province, is seen in this photo provided by the company on Aug. 19, 2021.

The petrochemical division saw its operating profit tumble to 75.4 billion won, from 1.08 trillion won in the same period, as a fall in demand, due to higher oil prices and global inflation, narrowed the profit margins of major products, the company said.

Shares in LG Chem rose 1.79 percent to 626,000 won on the main Seoul bourse on Monday, outperforming the broader KOSPI’s 1.11 percent gain. The earnings results were released after the closing bell.