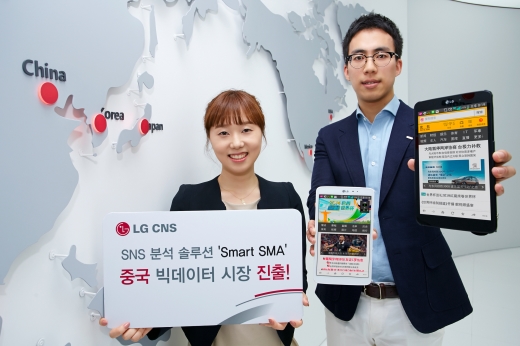 Based on its accumulated know-how on social media analysis in the domestic market, LG CNS selected China for its first overseas target. (image: LG CNS)

Armed with its social media analysis solution “Smart SMA” developed in 2012, LG CNS made its debut into the big data market in China providing one-stop services utilizing big data. The Smart SMA solution is available in three languages in Chinese, English and Korean.

Noticing the rapid growth in the big data market, LG CNS formed a task force for big data solutions the first such initiative in the IT industry and led the domestic big data market with “Big Data Platform (SBP),” an optimized and integrated enterprise big date platform, and “SBP Appliance,” a big data appliance with pre-installed SBP and optimized hardware configuration, both developed in 2012.

Based on its accumulated know-how on social media analysis in the domestic market, LG CNS selected China for its first overseas target. With the total population of 1.3 billion, Chinese SNS users have increased to 420 million in 2013, a 25 percent increase annually since 2010 on average. With US$850 million market value which grows 50 percent annually, China is considered one of the largest SNS analysis markets.

However, its SNS analysis market is in the baby step of just monitoring the flows. LG CNS is estimated to be a strong competitor with its “Smart SMA” solution.

With the solution, Chinese companies can easily and fast collect and analyze a vast amount of information on social media. By providing one-stop customized consulting by industry, the Smart SMA solution enables the companies to make use of the analysis results into their businesses like marketing, public relations and product development directly.

Since 2012, LG CNS has demonstrated the Smart SMA solution in LG Electronics’ Chinese branch office and verified its effectiveness on the spot. Through the partnership with Chinese marketing firm SAS China, it has accelerated its advancement into the Chinese market. The two companies expect synergy effects by combining LG CNS’ social media analysis know-how and SAS China’s local marketing capability.

Meanwhile, LG CNS plans to advance into the big data analysis markets of English-speaking countries with its entry into Chinese market as a momentum. Also, it will introduce a new service providing new insights by combining social media analysis and internal corporate data such as trade area analysis and sales data.

Kim Dae-hoon, president of LG CNS, said, “It becomes more and more important to make practical value by analyzing geometrically increasing big data and applying it into the industry. With our advancement into the Chinese market for which the world is eying, we will devote all our strength to the global big data market.”