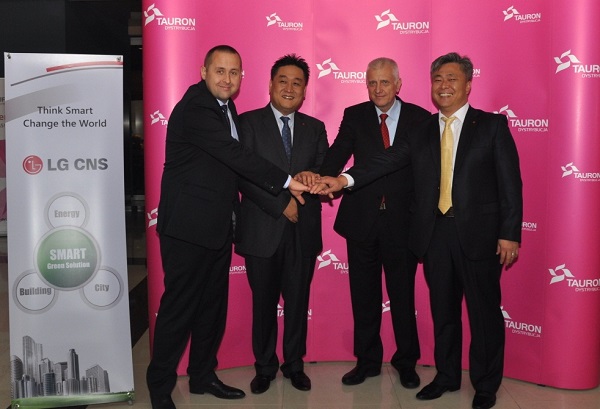 LG CNS plans to start the project in September to install AMIs to 330,000 homes in the city of Wroclaw and surrounding areas in Southwest Poland. (imgae: LG CNS)

SEOUL, Sep. 25 (Korea Bizwire) — LG CNS announced that it won a tender for the supply of 330,000 units of Advanced Metering Infrastructure and the installation of its system at the price of 48 billion won, or about US$46 million, from Tauron Dystrybucja S.A., the largest electric utility in Poland.

The infrastructure is a smart meter to measure real-time energy usage and send the information to the central system to realize the smart grid system.

The IT services company formed a consortium with Eltel Networks of Denmark, World IT Systems and Eltel Networks Olsztyn in Poland to carry out the project, which is the largest one in the smart grid area a Korean company has won in Europe.

The Seoul-based IT service provider plans to start the project in September to install AMIs to 330,000 homes in the city of Wroclaw and surrounding areas in Southwest Poland and set up a Head End System to gather and analyze the data from the devices by April 2017.

Thanks to the project, the IT affiliate of LG Group now has an upper hand in the Polish AMI market whose size is estimated at $1 billion. Poland has to fulfill the EU Mandate 2020, which makes EU governments install the infrastructure to 80 percent of all homes in their nations by 2020 to save energy. Therefore, Poland plans to phase in the system to 16 million households by 2020.

“The project which is the first smart grid business LG CNS has won in Europe is expected to be a stepping stone to enter the Europe market,” Kim Ji-seob, managing director of Smart Green division in the company, said. “We put forth our utmost effort to become a world-leading company in the energy sector by successfully completing the project,” he added.