SEOUL, Oct. 30 (Korea Bizwire) — LG Electronics Inc. said Friday its net profit nearly doubled in the third quarter from a year earlier on the back of strong global demand for its TVs and home appliances amid the coronavirus pandemic.

The South Korean tech giant said its net income reached 649.2 billion won (US$573.6 million) in the July-September period, up 87.8 percent from 345.7 billion won the previous year.

Its third-quarter operating income stood at 959 billion won, up 22.7 percent on-year, while sales reached 16.9 trillion won, rising 7.8 percent over the same period. Both figures are record highs for the company in the third quarter.

The results were in line with the earnings guidance announced earlier this month that beat the market consensus.

LG said its strong performance in the third quarter was driven by robust home appliance and TV sales amid the stay-at-home trend driven by the pandemic.

“We expect demand to increase next year, although it is difficult to rise to pre-pandemic levels,” the company said. “Recovery to such levels will take a long time.”

“Nevertheless, our home appliance and air solution division expects demand for hygiene and health care-related products to increase based on customer needs. We will expand such features to our products,” it added. 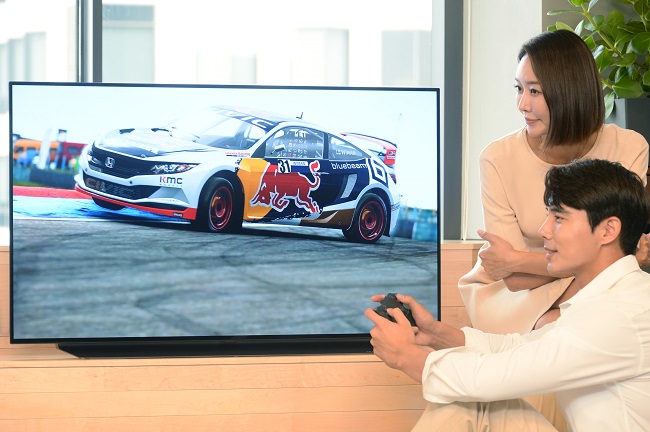 Models pose for a photo with LG Electronics Inc.’s 48-inch OLED TV, in this photo provided by the company on July 24, 2020.

According to market researcher TrendForce, LG was the world’s second-largest TV vendor in the third quarter after its TV shipments increased 6.7 percent on-year to 7.94 million units.

The South Korean tech giant’s struggling mobile business narrowed its operating losses to 148.4 billion won in the third quarter. The company’s mobile business has been in the red since the second quarter of 2015.

LG said sales from its mobile division stood at 1.52 trillion won, up 16.5 percent on-quarter, thanks to a recovery in global demand for mobile phones.

The company said it will target European and Central and South American markets with 5G and budget phones to capitalize on market share given up by Huawei Technologies Co., as U.S. sanctions have hurt the Chinese company.

LG has expanded its budget smartphone lineup in major markets to overcome the division’s slump.