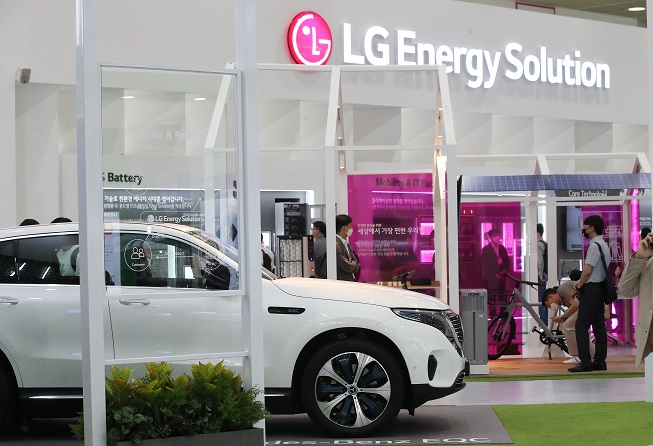 In this file photo, an LG Energy Solution showroom is set up at the InterBattery 2021 exhibition held at COEX in southern Seoul, on June 9, 2021. (Yonhap)

SEOUL, June 29 (Korea Bizwire) — LG Energy Solution Ltd. (LGES) has decided to reconsider its 1.7 trillion-won (US$1.31 billion) plan to build a new battery plant in the U.S. state of Arizona, as global inflation and a sharp fall of the Korean currency are expected to incur greater costs, company officials said Wednesday.

“We are thoroughly reassessing the timing, scale and details of the investment, due to a sharp increase in investment costs stemming from the deteriorating business environment,” a LGES official said by phone.

LGES, the world’s second-largest battery maker, unveiled the plan in March to build what will be its second standalone electric vehicle (EV) battery plant in America.

The move was seen as part of LGES’ push for expansion in North America amid rising demand for cylindrical batteries widely used in EVs and other power tools.

The plan has been put on hold, however, as the amount of investment for the new plant has swelled to mid-2 trillion won amid global inflation and the recent sharp depreciation of the Korean currency, according to the company.

Last Thursday, the Korean won fell below the 1,300 won level against the U.S. dollar for the first time in nearly 13 years.

It is expected to take at least four to six months before LGES makes its decision on the Arizona plant.

If completed, the Arizona plant, to be located in Queen Creek, would be the first cylindrical battery plant run by a South Korean battery maker.

LGES had planned to start running the plant in the second half of 2024, aiming for an annual production capacity of 11 gigawatt hours (GWh).

The construction under way in Tennessee and Michigan for two other factories, being jointly built with General Motors Co. (GM), will continue as planned, LGES said.

LGES currently operates its own factory in Michigan and another in Ohio with GM.