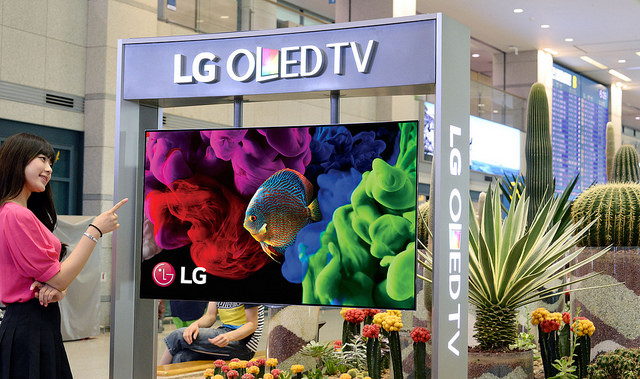 Without the need of a backlight, the LG’s awarding-winning 55-inch OLED TV has an ultra-thin panel of around five millimeters and offers more accurate and deeper colors than general LCD TVs. (image: LG Electronics)

SEOUL, Aug. 21 (Korea Bizwire) – A curved OLED TV and a French-door refrigerator from LG Electronics have been selected as the best home appliances by retailers and distributors in the United States.

According to an August 21 statement from LG, the second largest electronics maker in Korea, two of its products won 2015 VIP (Very Important Product) awards from TWICE, a US-based weekly trade magazine for professionals in the consumer electronics field.

TWICE gave praise to LG’s OLED TV, saying, “With no light bleed, LG OLED achieves true black for infinite contrast that delivers crisper images and color. Unlike most LCD TVs, it does not suffer from color washout and lower contrast when viewed off-axis.”

Without the need of a backlight, the LG’s awarding-winning 55-inch OLED TV has an ultra-thin panel of around five millimeters and offers more accurate and deeper colors than general LCD TVs.

The company also received an award for a feature-packed four-door refrigerator that offers 30 cubic feet of capacity, allowing consumers to tailor the refrigerator to their storage needs.

The award-winning fridge includes a CustomChill drawer, located between the refrigerator and freezer, which offers additional refrigerator or soft-freezer space. Four temperature settings within the drawer provide consumers the flexibility to store a range of foods.

TWICE has been giving out VIP Awards since 2013, with the winners being determined by online voting from retailers and distributors who were asked to make their selections based on product features, product design and potential value to consumers.

An official at LG said, “With the awards, our products are recognized as competitive products by our retail partners. We will keep introducing innovative products going beyond the expectations of our customers.