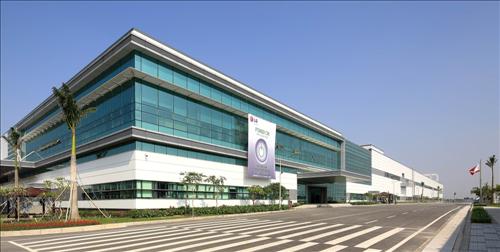 Shown is LG Electronics’ new production plant in Vietnam that opened on March 27, 2015. The complex will produce the tech firm’s key export items such as smartphones and TVs. (Photo courtesy of LG Electronics)

SEOUL, March 27 (Korea Bizwire) — LG Electronics, South Korea’s No. 2 tech giant, opened a new production base in Vietnam on Friday that will manufacture the company’s key products for exports, the company said.

Located in Haiphong, a northern port city of the country, the 800,000-square-meter Vietnam Haiphong Campus will allow LG to produce price-competitive electronics goods, including its globally-sold smartphones and TVs, the company said. It plans to spend US$1.5 billion on the complex through 2028.

LG’s existing factory in Hung Yen, which produces smartphones and TVs, and another one in Haiphong that makes washers, air-conditioners and vacuum cleaners will be relocated to the new complex.

The company said it had chosen the port city to make exports easier and to take advantage of Vietnam’s abundant workforce and tax incentives. The firm first entered the country in 1995 by opening a factory in Hung Yen.

Samsung Electronics, LG’s rival, has also been advancing into Vietnam. In November, the Vietnamese government approved a $3 billion expansion of its handset-manufacturing facilities there.

Samsung said it will extend the handset manufacturing line to Vietnam’s northern region of Thai Nguyen, which went into operation in March 2014 with an annual production capacity of 120 million units. The world’s No. 1 maker of smartphones already has spent $2.1 billion on the facilities.

When completed, the size of the Thai Nguyen production line will be bigger than that of Bac Ninh, another of Samsung Electronics’ key manufacturing bases located just north of Hanoi.