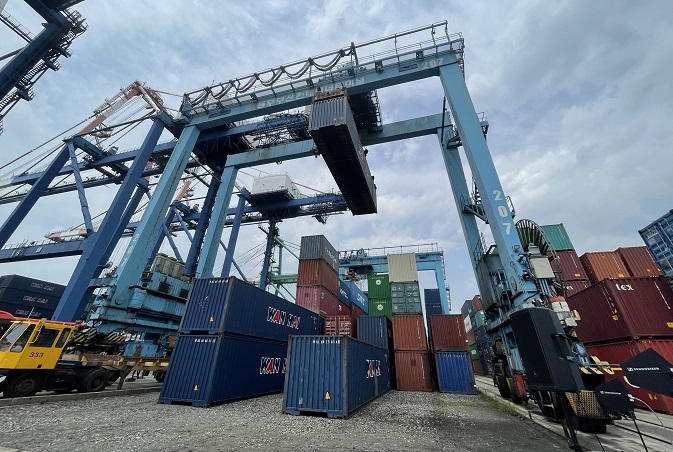 An automated yard crane, equipped with sensors and 5G network infrastructure, picks up a cargo container at Busan Port, 453 kilometers southeast of Seoul, on April 30, 2021. (Yonhap)

BUSAN, May 2 (Korea Bizwire) — A towering shipyard crane nimbly moves over stacks of cargo crates at a terminal in Busan Port, South Korea’s largest seaport 453 kilometers southeast of Seoul, to snatch a container box and gently load it onto a truck.

While the scene is business as usual for the bustling port that processed over 410 million tons of cargo last year, the crane is unusual in that its driver’s seat — 25 meters off the ground — is empty.

The over 20-year-old industrial machine runs in semi-autonomous mode, controlled remotely by an operator in an office a five-minute drive away.

The spreader, or the claw, of the crane is retrofitted with six laser sensors and four cameras connected to telecom operator LG Uplus Corp.’s ultrafast 5G network infrastructure, which locates cargo containers on its own and seamlessly picks them up at the operator’s remote command.

The latest generation network reduces latency to extremely low levels in live video feeds — 104 milliseconds compared with 660 milliseconds on 4G LTE — so that operators can monitor the crane’s operations in real time and control the crane in more complex situations with a video game console-like joystick.

The company expects the technology to reduce safety risks that crane operators face high above the ground while working eight-hour shifts.

“That will allow one operator to operate and oversee four cranes at once.” 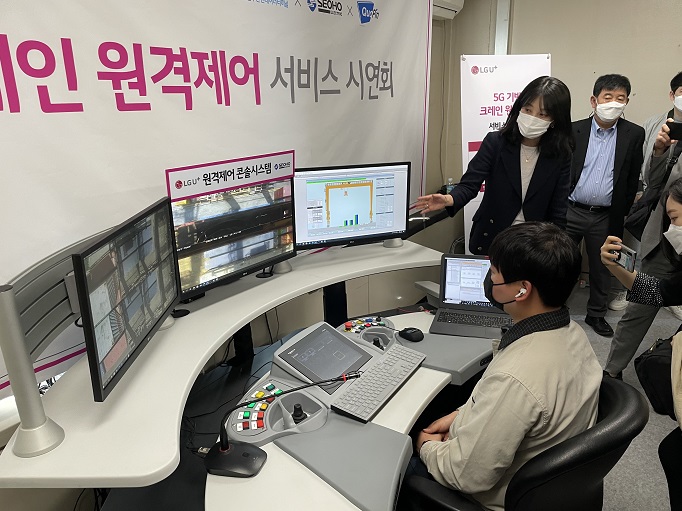 A crane operator monitors the automated machine at an office in Busan Port, 453 kilometers southeast of Seoul, on April 29, 2021. (Yonhap)

It aims to commercialize the cranes sometime this year and expand the technology to other shipyards across the country, including at the southern port city of Gwangyang, 423 kilometers south of Seoul.

But the crane is just a part of a bigger pitch by LG Uplus: automating the entire seaport infrastructure with 5G technology.

The telecom operator aims to roll out container-carrying self-driving trucks, unmanned forklifts and drones that monitor the port’s cargo, all powered by 5G.

The move comes as South Korean telecom operators seek to fully utilize the high speeds and low latency of 5G networks through business and industrial applications.

The telecom operator’s cranes are set up with 5G equipment based on the 3.5 gigahertz (GHz) band, compared with the 28GHz band that unlocks the network’s fastest speeds, which can theoretically be up to 20 times faster than 4G LTE.