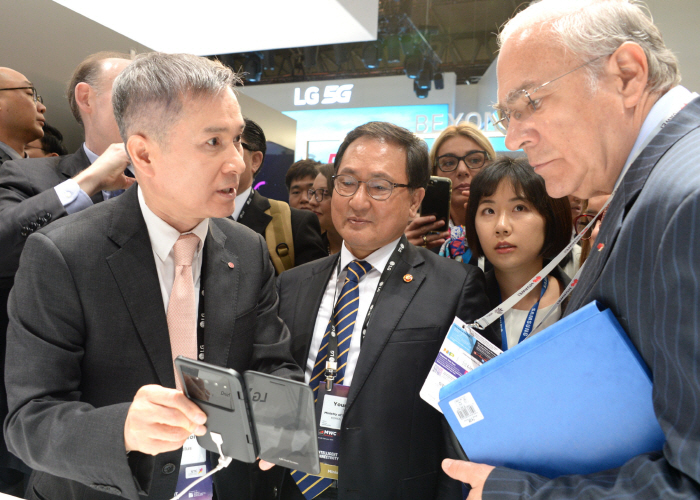 Ha Hyun-hoi (L), CEO of LG Uplus Corp., shows a mobile application on a LG V50 ThinQ smartphone to visitors at its booth at MWC Barcelona on Feb. 25, 2019. (Yonhap)

LG Uplus CEO Ha Hyun-hoi tried to assuage concerns of its 5G network ahead of the commercial launch in South Korea next month, as the United States, Japan and Europe were considering a ban on Huawei’s kit over potential security breaches.

“Huawei is one of the important gear suppliers to LG Uplus, along with Samsung Electronics, Ericsson and Nokia,” Ha said during a press briefing at MWC Barcelona. “We take security very seriously and are looking closely (into Huawei’s equipment).”

While LG Uplus signed contracts with multiple vendors, Huawei is by far its biggest supplier because it delivers quality products on time, the Korean operator said.

Huawei’s gear is used in about 95 percent of 15,000 5G base stations established in the nation so far, according to the firm.

LG Uplus earlier said it aims to complete building its 5G infrastructure in major cities by the end of 2019.

“We are not using equipment by suppliers with a high risk of security issues in the fixed line,” Ha said. “As LG Uplus’ employees are in charge of checking and managing (the 5G network), we haven’t had any security problems so far.”

The company has also taken extra security measures, such as separation of the network and setting fire walls, to prevent potential security breaches by a backdoor attack and hacking, the officials said.

Huawei is the world’s largest telecommunications equipment provider and has captured key markets by offering high-tech gear at competitive prices.

But the Chinese company has effectively been left out of the U.S. market on worries that its technology could enable spying from the Chinese government, accusations Huawei denies. In addition to the U.S., Canada and Germany are weighing possible bans on Huawei’s 5G equipment citing security risks.

China’s Huawei, Finland’s Nokia and Sweden’s Ericsson are the three biggest providers of telecom equipment in the world, accounting for more than half of revenues in the market, according to the research firm Dell’Oro Group.

Over the three-day mobile congress, LG Uplus said it will push for partnerships with global telecom players, including America’s Verizon, Britain’s Vodafone and Finland’s Elisa, in 5G technology.

With Verizon, the largest mobile carrier in the U.S., LG Uplus will cooperate in investing in augmented and virtual reality content and developing mobile games powered by 5G networks.

The latest move comes as 5G smartphones, which would be able to support the data-heavy content and games, are set to hit the Korean market in March and the U.S. in the coming months.