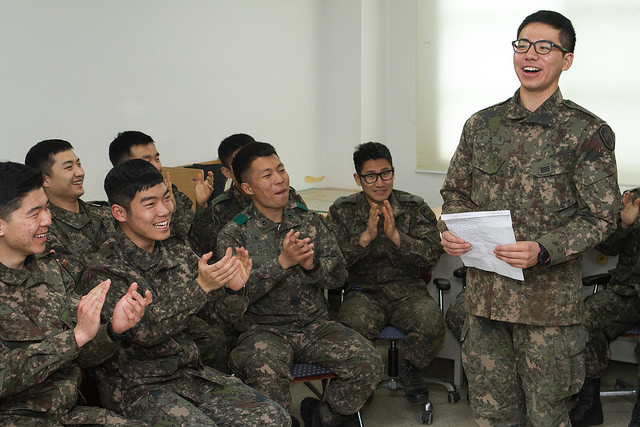 The ministry plans to deploy a total of 44,686 2G phones in the barracks by investing 3.6 billion won over three years. (image: Republic of Korea Armed Forces/flickr)

According to the Ministry of National Defense, the smallest mobile carrier was selected as the licensee for its project to deploy receive-only phones to military barracks as part of efforts to improve the welfare of soldiers. In the bid to select the licensee, LG Uplus asked the ministry to pay a symbolic 1 won for the project.

The ministry plans to deploy a total of 44,686 2G phones in the barracks by investing 3.6 billion won over three years. All three major mobile carriers participated in the bidding, with KT requesting 1.7 billion won and SK Telecom 2.1 billion won for the project, according to the defense ministry.

An official at LG Uplus said, “We admired the soldiers who delayed their discharge to fight for our country during a time of crisis after the mine attack from North Korea, so we decided to offer the mobiles phones for free to the soldiers.”

“With the defense military budget, the project has no profitability. However, we are happy to participate in the project to honor the admirable soldiers who try to defend the nation and its people,” he added.

In addition, LG Uplus’ decision was affected by vice-chairman Lee Sang-cheol, who once worked for the Agency for Defense Development, and whose elder brother is former defense minister Lee Sang-hun.

In addition to offering the mobile phones at a price of only 1 won, LG Uplus will also be providing a total of 14.1 billion won worth of service, including the installation of repeaters, their management and phone bills.

Once the project is completed, the parents of soldiers living in the barracks will be able to call their children from the end of their working hours until their curfew.