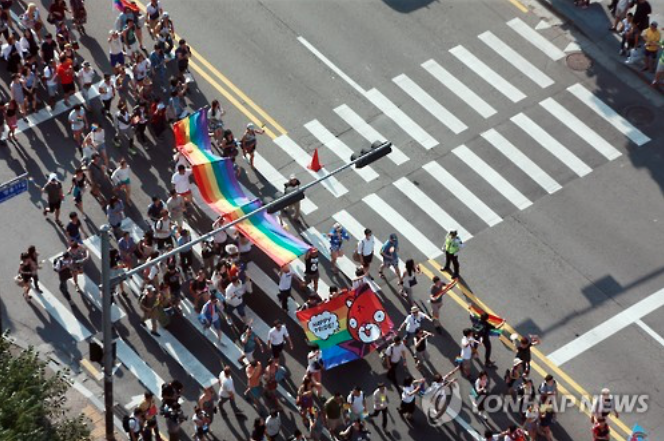 By 4:40 p.m. the queer parade march took off, and participants paraded 2.9km towards Myeongdong’s Lotte Department Store, and then back to the plaza. (image: Yonhap)

The festival, themed ‘Queer I Am, Cheers to Who We Are’, took place at Seoul Plaza, and celebrated its 17th anniversary with some 50,000 participants, according to the organizing committee (police estimates put the crowd at 10,000 people). The event was organized by the KQCF Organizing Committee.

This is the second time the event was held at Seoul Plaza, and the number of participants almost doubled after peaking at 6,000 last year due to widespread concern over the MERS virus.

Various event booths were installed by the organizations, businesses, and embassies that participated in the event. Performances and a parade also took place. The festival was also joined by progressive Christian organizations such as ‘Christian Solidarity for a World without Discrimination’ and ‘Rainbow Jesus’.

Some 18 ambassadors and diplomats were present as well, including U.S. ambassador Mark Lippert and EU ambassador Gerhard Sabathil.

Mark Lippert relayed a message from U.S. Secretary of State John Kerry, “Wherever you are, we are with you.” Ambassador Sabathil also showed active support for the LGBT community.

“I wish we could acknowledge the way we are, and live our lives to the fullest,” said Kim Bo-mi, president of the student body at Seoul National University, who received significant media attention after coming out publicly. “I still feel society’s walls even after my coming-out, but let us keep our efforts so we can tear these walls down.”

By 4:40 p.m. the queer parade march took off, and participants paraded 2.9km towards Myeongdong’s Lotte Department Store, and then back to the plaza.

Although certain Christian groups interfered with the festivities by opposing and trying to stop the march, no physical confrontation took place with police forces surrounding the parading participants.

On the same day, 12,000 members (police estimate) of conservative organizations and Christian groups organized an anti-LGBT rally on the opposite side of Seoul Plaza. Some 300 members of a conservative group also marched the area, denouncing Saturday’s festival.