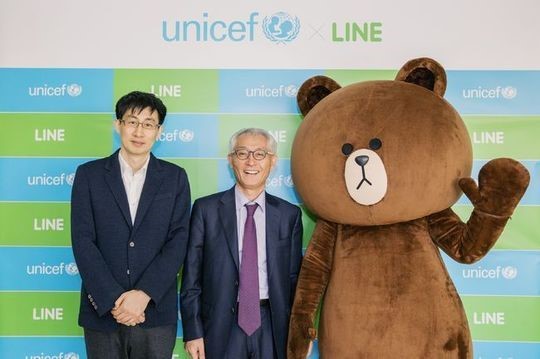 Jong Nam Oh, Executive Director of The Korean Committee for UNICEF and Jung-ho Shin, Chief Executive Officer (CEO) of LINE Plus Corporation and Chief Globalization Officer (CGO) of LINE Corporation, held “UNICEF-LINE Global Partnership Signing Ceremony” in Seoul on the 13th to agree on sponsorship partnership to support the children of the world.

Through this strategic partnership, UNICEF and LINE aim to create a brand value with competitive power and raise funds effectively. LINE plans to use character licensing by producing and selling Plush Toy and mugs of its flagship character, Brown, with the UNICEF logo. In addition, LINE will help fundraise by developing and selling digital LINE stickers. LINE’s virtual coin called “Free Coin” will contribute to the fundraising as well. It is anticipated by LINE that various PR and marketing activities will raise the fund of minimum of KRW 3.3 billion in 3-years.

Jong Nam Oh, the Executive Director of the Korean Committee for UNICEF, said “It is highly meaningful that Korean Committee participated as a representative for the partnership between UNICEF and LINE, a global corporate and a messenger app used in 230 countries worldwide.” He added that “The strategic partnership between UNICEF and LINE is expected to enhance brand value, produce competitive products, and moreover, create synergy to increase sponsoring opportunities for UNICEF using LINE’s digital platform.”

Jung-ho Shin, CEO of LINE Plus Corporation and CGO of LINE Corporation commented, “LINE has been constantly evolving to become the world’s leading mobile life platform. I hope this partnership brings excitement to all LINE users by being able to take on an important role to support the children in developing countries.”

The funds raised through global partnership between UNICEF and LINE will be used for children’s relief, especially for the health, nutrition, basic education of children in developing countries.

About UNICEF
UNICEF works in more than 190 countries and territories to help children survive and thrive, from early childhood through adolescence. The world’s largest provider of vaccines for developing countries, UNICEF supports child health and nutrition, good water and sanitation, quality basic education for all boys and girls, and the protection of children from violence, exploitation, and AIDS. UNICEF is funded entirely by the voluntary contributions of individuals, businesses, foundations and governments. For more information about UNICEF and its work visit: www.unicef.org

About LINE Corporation
LINE Corporation is based in Japan and develops and operates the LINE app for smartphones. Since launching in June 2011, the LINE app has grown into a global service used in 230 countries, ranking first in the free app category in 60 countries. LINE offers free one-to-one and group messaging, as well as free domestic and international voice and video calls. LINE also includes a wide array of social elements such as fun and expressive stickers, a personal Home, a Timeline, and numerous LINE family apps, including LINE games and LINE camera. For more information about LINE Corporation, please visit http://linecorp.com/en/.