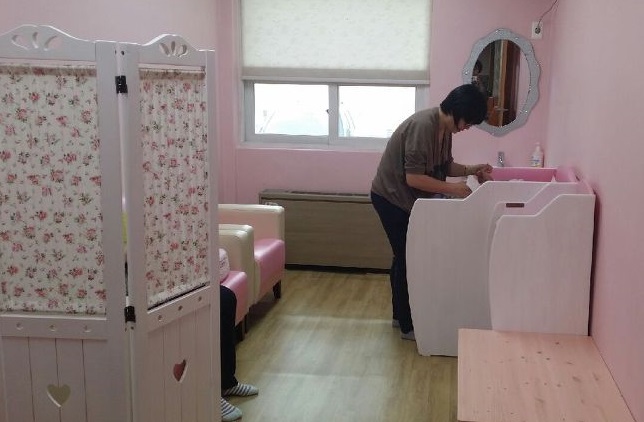 Using the data collected, the Welfare Ministry plans to come up with a system to better regulate the management of lactation rooms across the country. (image: Yeongcheon City Community Health Center)

SEOUL, Sept. 18 (Korea Bizwire) — While there are more than 3,000 facilities in South Korea that allow mothers to nurse or feed their infants, many see little use.

In addition, 4 out of 10 nursing facilities were off limits to men, barring fathers from taking advantage of the venues.

This is according to a survey performed by the Ministry of Health and Welfare that carried out checks of lactation facilities between January and July of this year.

At 93.5 percent, the vast majority of the nation’s lactation rooms were available for use by both internal and external personnel.

The study also noted that 86.7 percent of the facilities were cared for once a day or more, while 7.4 percent were not maintained on a regular basis or just once every seven days.

Meanwhile, 63.1 percent of the facilities were available for use by fathers with babies, while some facilities had notices barring men from entering.

Among the nursing rooms, 96.2 percent had sofas and tables, while 72.5 percent had diaper changing stands and 76.8 percent provided air conditioning, heating and water filters.

Using the data collected, the Welfare Ministry plans to come up with a system to better regulate the management of lactation rooms across the country.

The locations of the lactation rooms can be found on a website operated by the Planned Population Federation of Korea (www.sooyusil.com).