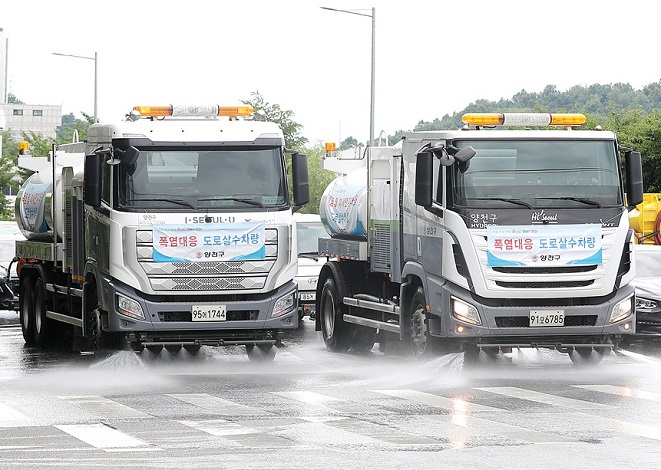 This photo provided by the Yangcheon Ward office in western Seoul on July 20, 2021, shows water sprinkler trucks in operation amid an extended heat wave across the nation.

SEOUL, July 20 (Korea Bizwire) — Public shade canopies, water spraying trucks and ice-cold water bottles are being mobilized and supplied plentifully across South Korea this week, as an extended nationwide heat wave compounds woes of local governments already burdened with having to deal with the fourth wave of COVID-19.

The country remains gripped by a scorching heat wave in the wake of the annual rainy season, with sensible temperature levels having reached as high as 35 C in many parts of the nation for over a week.

The southeastern city of Daegu, known to be one of the hottest places in South Korea, began early operation of its 143 water-related public facilities and installations, such as fountains, artificial waterfalls and water parks, in May in anticipation of the early summer heat wave.

The city, 302 kilometers southeast of Seoul, plans to complete the installation of 211 public shade canopies on streets and crosswalks across the city this summer. Last year, the city government installed 135 canopies.

The nearby city of Andong began running water sprinkler vehicles throughout the city Monday, and the city of Yeongcheon is providing free ice-cold water bottles at bus stations near the city’s key traditional market, frequently visited by senior citizens.

The Gyeonggi provincial government installed 1,331 new shade canopies and other cooling infrastructure across the province, and the Gwangju city government also began operating 28 sprinkler vehicles to bring down the scorching heat of street pavement. 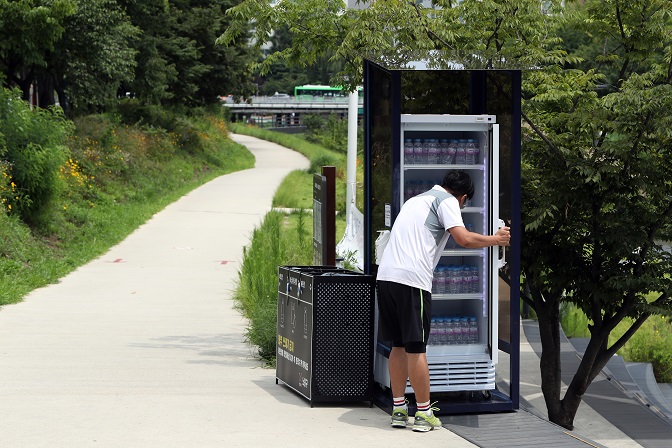 A person takes a bottle of water from a refrigerator set up for villagers at a neighborhood park in Seoul amid a heat wave on July 20, 2021. Such fridges, which are installed in various places, will provide free water until the end of August. (Yonhap)

Local governments have also increased special monitoring of poverty-stricken senior citizens living alone amid concerns of their health and safety in light of the extended heat streak.

Local officials in Gyeonggi Province and Andong are regularly checking the conditions of seniors living alone and those at homeless shelters either through phone calls or in-person visits.

The city of Gwangju in the southwest has increased the number of its heat shelter facilities at local welfare centers to up to 1,500 while providing money to cover air conditioning charges.

Despite such measures, observers are expressing concerns over an apparent lack of support toward workers at COVID-19 testing centers across the country in terms of battling the heat.

The hot weather is a common problem experienced by the medical staff at testing facilities during the summer, as many of them work in full body protective gear to shield themselves against transmissions.

People arriving at testing centers are also becoming increasingly susceptible to the summer heat, as lines have become especially long as of late amid the nation dealing with the fourth wave of the pandemic.

In response, the Gyeonggi provincial government has been providing ice-cold water and fans to people waiting in line, while the Andong city government has set up additional heat shade tents and portable air conditioners at key testing centers.