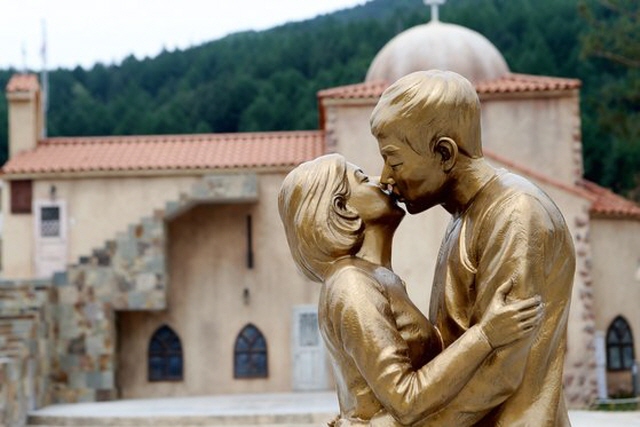 A kissing statue of the Song-Song couple located in “Descendants of the Sun” theme park in Taebaek, Gangwon Province. (Yonhap)

SEOUL, Jul. 2 (Korea Bizwire) — A recent series of scandals and gossip involving Korean Wave stars has dealt a heavy blow to provincial governments trying to utilize their associations with entertainers to attract tourists.

Most recently, the Taebaek city government in Gangwon Province became an unlikely victim when celebrity couple Song Joong-ki and Song Hye-kyo, who both starred in the 2016 smash-hit drama “Descendants of the Sun,” shocked their fans by announcing their divorce last week, only two years after their much-celebrated marriage.

The mountainous city, which was once a hub of coal mining, was a filming location for the drama that gained huge popularity across Asia.

The city government spent 270 million won (US$231,000) to restore the set in 2016 and create a theme park with a statue depicting a scene where the couple kissed.

It became one of the most famous tourist destinations in South Korea after the drama’s co-stars got married in 2017.

Moreover, it held the annual “Taebaek Couple Festival” since 2017 at the theme park to attract tourists to the city.

But the festival was canceled last week, before its third edition was set to kick off in late July, after the news of the couple’s divorce broke.

In Seoul, the Gangnam District Office is in trouble after “Gangnam Style” star Psy was questioned by police for hours last month over a sex scandal involving Yang Hyun-suk, former CEO and chief producer of YG Entertainment, the firm that manages the star.

The rapper-singer was with Yang when he allegedly arranged sex services for foreign investors. Yang has denied the allegations.

The probe into Yang came as other big-name YG artists have been embroiled in a series of scandals, including drug allegations.

Yang resigned from the top post at the company earlier in the month, giving up his control of South Korea’s third-biggest listed K-pop label.

B.I, the songwriting leader of K-pop boy band iKON, one of the promising boy bands under YG, left the band earlier last month on allegations that he bought illegal drugs three years ago.

In March, Seungri was dispelled from boy band BIGBANG and the talent agency after a nightclub associated with him came under investigation over allegations of drug use and sexual abuse.

His case was referred to the prosecution last week on embezzlement and pimping charges. 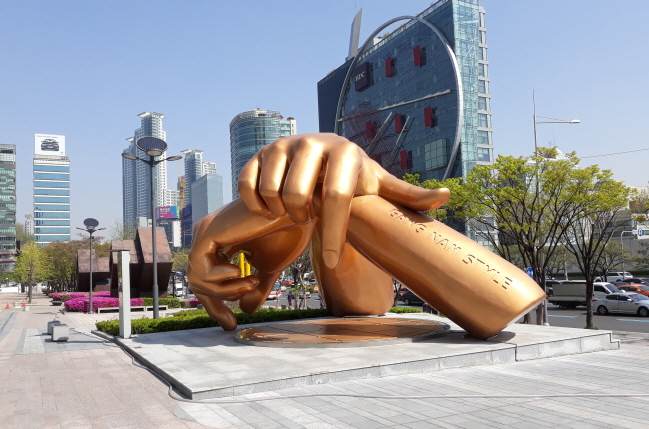 The statue of “Gangnam Style” (Yonhap)

The news of the police probe on Psy instantly spurred controversy over whether the district office should remove the statue it erected in 2016 outside the COEX shopping center in the posh Gangnam district in honor of Psy’s global hit “Gangnam Style.”

Part of the song’s popular video was filmed at the site.

Some critics say the metal sculpture, featuring two fists overlapped in the style of the song’s “horse-riding” dance move, is inappropriate due to Psy allegedly having been present as Yang arranged sex services.

Before that, the same Gangnam neighborhood where the headquarters of many big-name record labels and entertainment agencies are located, was affected by a scandal involving a nightclub called Burning Sun.

The office had to remove the names of two of its neighborhood forests honoring K-pop stars, BIGBANG’s Seungri and Roy Kim, after they were grilled by police over allegations that they shared obscene materials on a mobile chat with several other entertainers.

The city of Incheon, west of Seoul, got rid of “Park Yu-chun Cherry Blossom Road” after the singer was accused of having taken illegal drugs.

On Tuesday, the actor and former member of boy band JYJ received a suspended prison term for drug use.

Experts advise provincial governments not to depend heavily on “hallyu,” or Korean wave, stars to attract tourists because their popularity can be short-lived and their images can easily be tainted by scandals or gossip.

“Hallyu stars are so popular that governments could not help but depend on them to lure foreign tourists. But it’s risky,” culture critic Ha Jae-keun said.

“Therefore, the entertainment industry has to be more responsible and ethical for their roles in creating an image of South Korea.”