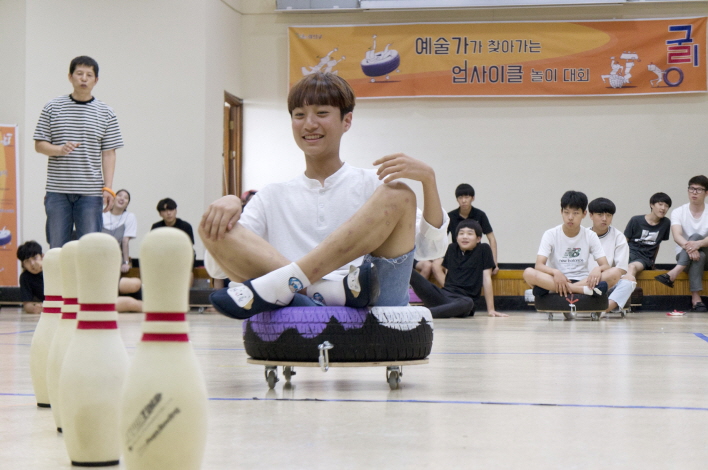 Gurling is an educational policy for culture, art and play that uses old tires as a tool. (image: Gwangsan District Office)

Gwangsan District in the city of Gwangju said that it will sign a business agreement with Kumho Tire Co., South Korea’s second-largest tiremaker, and the Gwangju Educational Research Information Service (GERIS) for the creation of the “Gurling” brand on Wednesday.

Gurling is an educational policy for culture, art and play that uses old tires as a tool. The name ‘Gurling’ was derived from ‘curling,’ with the letter ‘G’ a nod to the Korean word for ‘rolling’.

Lee Ho-dong, who works as a resident artist at the House of Youth Culture in Wolgok-dong under the GERIS, developed Gurling in 2017 during the course of developing play education for teenagers.

Like cushions, old tires were put on their sides and wheels were installed. Similar to the way curling is played, teenagers would roll the tires.

Plans have also been developed to make use of the tires in a variety of other games such as Gurling Train and Gurling Bowling.

Gurling recycles tires used for research, not for products sold on the market. After a cleaning process, eco-friendly paints are applied to sitting areas to reduce concerns of exposure to harmful substances.

There are also cases of play development in the Netherlands and other countries where abandoned items such as parts of power generation facilities, steel drums and discarded vehicles have been recycled.

With the signing of the agreement, the GERIS will add Gurling to its curriculum, while Kumho Tire will support waste tires and funding for the project.

Gwangsan district is in charge of the planning and execution of the project.

After the agreement ceremony, students from 10 elementary and middle schools will take Gurling classes for three months.