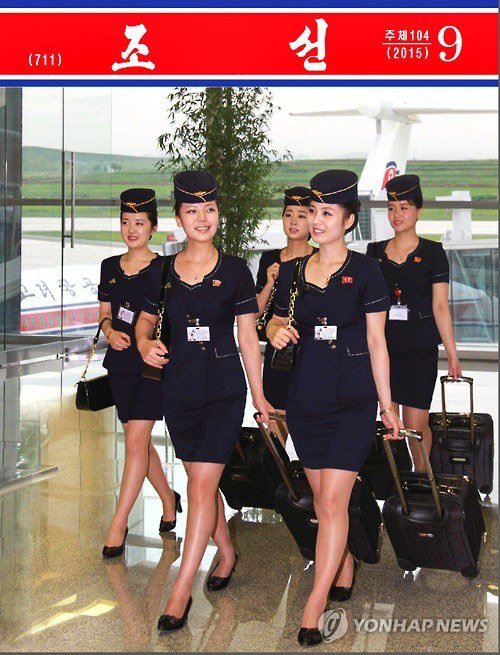 In the photo, the flight attendants are wearing navy uniforms, which were updated in 2013, that feature badges of Kim Il-sung and Kim Jong-il on their left chest, and are walking through the airport with their suitcases. (image: Yonhap)

According to Yonhap News, five female flight attendants from Air Koryo were featured on the cover of the September issue of Chosun, a monthly illustrated magazine published in North Korea that targets foreign countries.

In the photo, the flight attendants are wearing navy uniforms, which were updated in 2013, that feature badges of Kim Il-sung and Kim Jong-il on their left chest, and are walking through the airport with their suitcases.

The sophisticated new look of North Korean flight attendants seems to result from efforts of the Kim Jong-un government to revitalize tourism, with officials working hard to elevate the quality of airline services.

It is known that Kim Jong-un ordered a renewal of uniforms and in-flight meals as he was inspecting the Pyongyang Sunan International Airport in 2012.

Last month, Air Koryo changed their in-flight meal from burgers to gimbap, a popular Korean dish made from steamed rice and other ingredients rolled in dried seaweed. Along with Air Koryo’s changes, renovations at Sunan International Airport were also recently completed.

The magazine claims that the renovated airport is a ‘monumental creation in the era of a great leader, which has the perfect features of an international airport’.

However, evaluations of airline services in North Korea are typically very low.

According to Skytrax, an English research center specializing in airline services, Air Koryo received one star on a five-star scale, for the lowest score among 600 airlines all across the world.

Skytrax comments that Air Koryo is the only airline that received one star, and explained that it meant that they were poor in every area of evaluation.