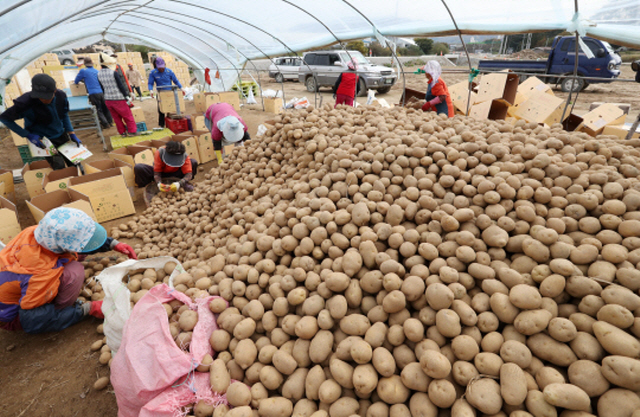 Gangwon Province is the largest producer of potatoes in South Korea. (Yonhap)

SEOUL, March 19 (Korea Bizwire) — The worsening outbreak of the new coronavirus has put a damper on consumption and lead to a big drop in eating out.

With the delay to the start of the school year, concerns are deepening for local farmers suffering from a sharp drop in demand.

Amid such circumstances, local governments are promoting the sale of agricultural products online, attracting much attention from the public.

Last year, farming households in Gangwon Province produced 138,000 tons of potatoes thanks to ample sunlight and precipitation, and only minor typhoon damage. This is more than 20 percent of the average annual production.

The supply has easily surpassed demand, sending wholesale prices plummeting. To make matters worse, the COVID-19 outbreak has prompted a drop in demand.

Potatoes are piled up to the ceiling in storage warehouses. The province plans to sell all of its current inventory of about 11,000 tons by April.

The province will first conduct sales to public institutions and expand sales to ordinary citizens online from March 23.

Gyeonggi Province also launched a campaign to jointly sell eco-friendly farm products, asking for their participation in the consumption campaign when shipments of eco-friendly school food products are on high alert.

A four-kilogram box of spinach, lettuce and 11 other agricultural goods is selling for 20,000 won, and discounts of 2,000 won are offered for joint purchases of more than 50 boxes.