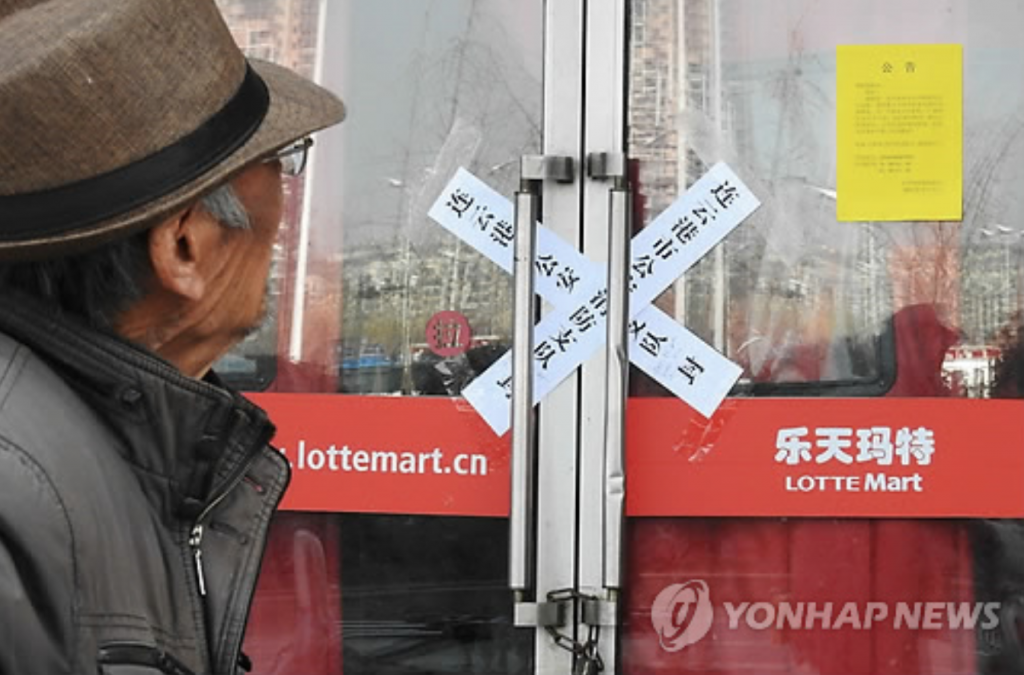 Nearly 90 percent of Lotte Mart outlets in China have been placed under suspension due to their failure to meet fire or other regulations or on voluntary suspension since February, as some Chinese consumers continued to stage anti-Korea protests near the stores. (image: Yonhap)

According to Lotte, 41 out of 75 Lotte Mart stores whose operations have been suspended for one month have not received re-inspection visits from Chinese authorities even after a one-month shutdown, with seven other outlets slapped with one-month business suspensions.

Nearly 90 percent of Lotte Mart outlets in China have been placed under suspension due to their failure to meet fire or other regulations or on voluntary suspension since February, as some Chinese consumers continued to stage anti-Korea protests near the stores.

The China-based retail outlet unit has been teetering on the brink of collapse as a protracted business suspension by Chinese authorities is leaving the firm with snowballing losses.

China has ratcheted up pressure against Lotte, South Korea’s fifth-largest family-controlled firm, since it handed over one of its properties to the Korean military so it can be used as a site for a U.S. Terminal High Altitude Area Defense (THAAD) battery.

Seoul’s deployment of THAAD on its soil has angered Beijing, which claims that it will be used to monitor its own military.

Lotte could suffer some 200 billion won (US$179 million) in losses in its Lotte Mart revenue if the shutdown continues for another month. Last year, sales from the China-based Lotte Marts reached 1.13 trillion won, or 94 billion won on a monthly basis, according to the firm.

The suspension deals a serious blow to the retailer, since its China-based business has long been running a deficit even though it has been in the world’s second-largest economy for some 10 years.

In 2016, Lotte recorded a combined 207 billion-won deficit in its department store and outlet divisions, of which about 80-90 percent came from its Chinese units.

Each Lotte Mart outlet in China hires some 120 locals on average, which means some 10,800 Chinese workers’ job security could be undermined.