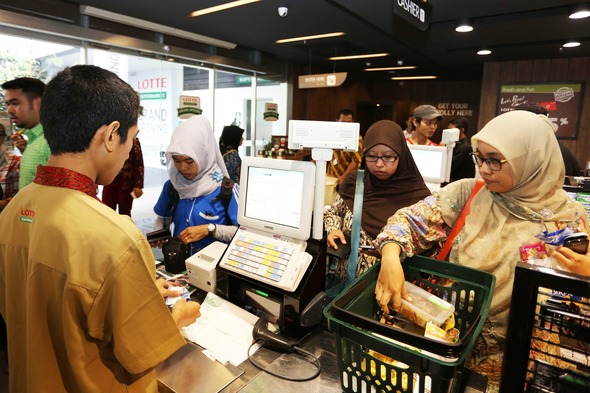 The 1,300-square-meter supermarket on the ground floor of Amaris Hotel will offer premium imported groceries and differentiate itself from other existing retailers with gourmet bakeries and global menus. (image: Lotte Mart)

SEOUL, Aug. 22 (Korea Bizwire) – In order to escape from the saturated domestic retail market and government’s regulations on large-scale retailers, Lotte Mart opened its first supermarket in Indonesia as a novel approach to expand its overseas sales.

Lotte’s first supermarket in Indonesia is located in Kemang, a residential area heavily populated by middle- and upper-class Indonesians and expatriates in southern Jakarta. The 1,300-square-meter supermarket on the ground floor of Amaris Hotel will offer premium imported groceries and differentiate itself from other existing retailers with gourmet bakeries and global flavors.

The major reason for Lotte Mart to advance into the supermarket business in Indonesia is that the big-box retailer of Lotte Group, largest retail business group in Korea, figured that it cannot grow any more in the Korean market due to the government regulations.

Korean government is, according to the industry, imposing stricter regulation on them by limiting the opening of new stores and  forcing them to close their operation twice a month to protect the small retailers and traditional markets. In fact, since April 2012 when the regulation was imposed, major larger supermarket operators have suffered  declines in sales for nine quarters consecutively.

However, the retail market in Indonesia is growing more than 10 percent annually since 2002. Currently, the Indonesia’s supermarket is dominated by Hero, Lion Super Indo and Ramayan, which together account for 75 percent of the market share.

Lotte’s Kemang store downsized itself to 20-30 percent of existing discount chains in Indonesia and stocked some 10,000 items focusing on daily necessities excluding home appliances, clothes, miscellaneous goods and sports equipment. More than 70 percent of the products in the supermarket are groceries.

Kim Young-gyun, head of Lotte Mart’s Southeast Asia unit, said, “We will quickly grow the supermarket business in Indonesia by making practical use of our six-year experience in Indonesia, approximately 3,000 partner businesses and their network. Based on the performance of the first supermarket, we will decide whether to open more stores in Jakarta and other major cities.”

Meanwhile, Lotte Mart is running 37 discount stores after acquiring the Indonesian unit of the Dutch discount chain Makro in 2008. Its total sales in Indonesia last year were around 1.65 trillion won (US$1.61 billion).