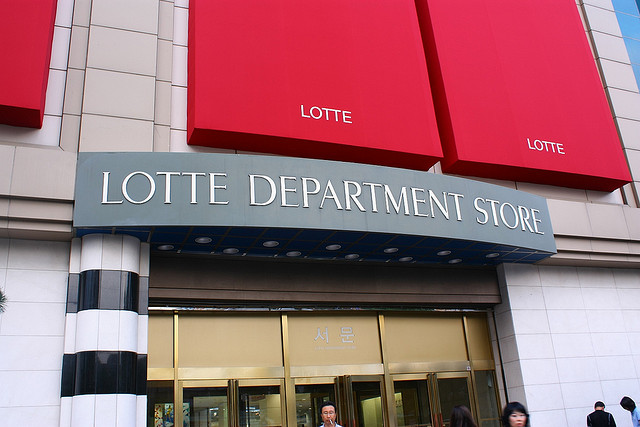 After selling off the real estate properties, Lotte will make long-term leases of them in the form of sale-and-leaseback contracts and keep running the operations. (image: Jonathan Tommy/flickr)

According to retail industry sources, Lotte Shopping, retail operator of Lotte Group, is in talks with Capstone Asset Management, an asset management firm specializing in real estate assets, to sell two department store buildings and three discount outlets worth 500 billion won (US$461 million) within this year.

After selling off the real estate properties, Lotte will make long-term leases of them in the form of sale-and-leaseback contracts and keep running the operations.

Prior to it, Lotte had sold seven retail buildings including two department stores and five discount stores to KB Asset Management at 601.7 billion won last August. In 2008, it sold three outlet buildings at 220 billion won and six buildings at 612.3 billion won in 2010 under the same sale-and-leaseback scheme.

An official at Lotte Shopping said, “Although our original plan was to sell 18 retail buildings to Singapore REITs to increase liquidity, it foundered and we turned our attention to domestic suitors. The deal is not finalized yet, but we will sell them within this year.”

“Although department stores are picking up, other business segments including big-box retail stores are under hard times. However, we are not selling them due to the deteriorating sales performance. The money coming from the real estate sales will be invested for more overseas sales expansion and more efficient operation of Avenuel World Tower,” he added.