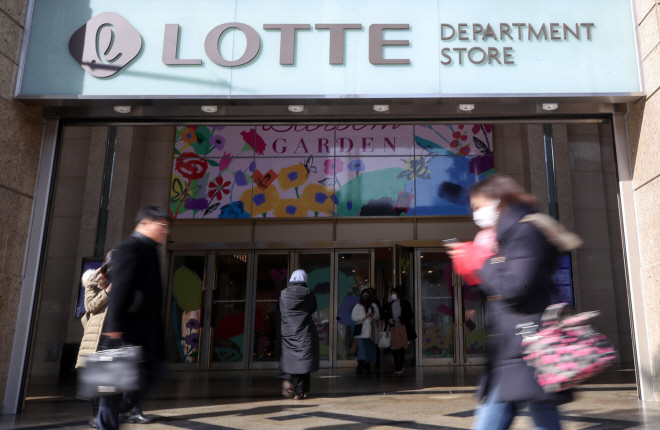 The main entrance of the Lotte Department Store in Myeongdong, central Seoul. (Yonhap)

Lotte Shopping will sell 200, or 30 percent, of its 700 brick-and-mortar stores, including department stores, discount stores and supermarkets, across the country to shore up its falling profit and strengthen the e-commerce business, the company said in a statement.

The company didn’t provide any fixed time frame for the asset sale plans.

“We will resolve fundamental problems and make a tangible result as soon as possible (through the restructuring efforts). And we will make all-out efforts to make the company one that’s welcomed by customers, employees and shareholders in the long term,” Lotte Shopping Vice Chairman and CEO Kang Hee-tae said in the statement.

To satisfy a changing appetite of customers, Lotte Shopping said it will provide “customized services to individual customers” by integrating strengths of its offline business and e-commerce business based on data of its 39 million customers.

Net profit plunged to 223.8 billion won last year from 478.6 billion won a year ago as increased corporate taxes and marketing costs cut into the bottom line, the company said.

In 2020, Emart aims to achieve 21 trillion won in sales by expanding its network of outlets, on which it will spend 845 billion won.

Meanwhile, Shinsegae Group, the parent firm of Emart, saw its net profit more than double to 598.17 billion won last year from 284.88 billion won a year ago helped by strong sales in the department store business.