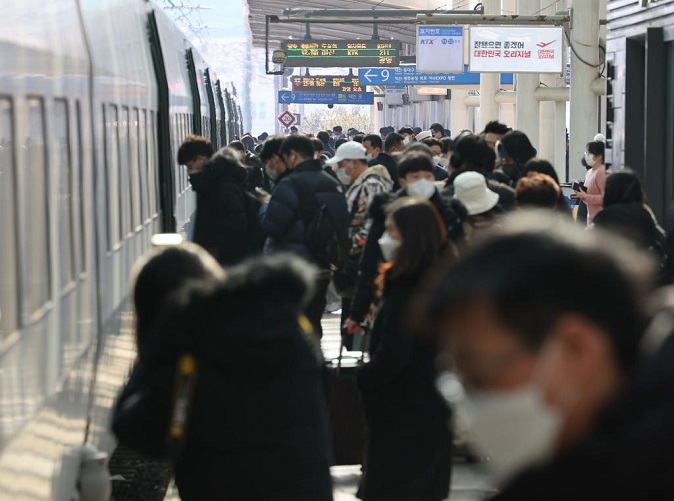 Travelers board a train at Seoul Station in central Seoul on Jan. 28, 2022, ahead of the extended Lunar New Year holiday. (Yonhap)

SEOUL, Jan. 28 (Korea Bizwire) — Despite a record surge of COVID-19, the annual exodus for the Lunar New Year holiday began Friday, as South Koreans head to their hometowns for family reunions and take trips during the extended holiday.

This year’s three-day holiday runs from Monday to Wednesday and it is extended by an extra two days due to the preceding weekend.

As the nation posted five-digit daily tallies of COVID-19 this week, the government is urging the public to refrain from traveling during the holiday, fearing gatherings of people will further heighten the rapid spread of the omicron variant.

Some people have given up on visiting their hometowns in accordance with the government’s recommendations, while others are determined to push ahead with their plans to see their parents and relatives.

The nationwide exodus is expected to create traffic congestion on major roads, expressways, railroad stations and airports throughout the extended holiday. 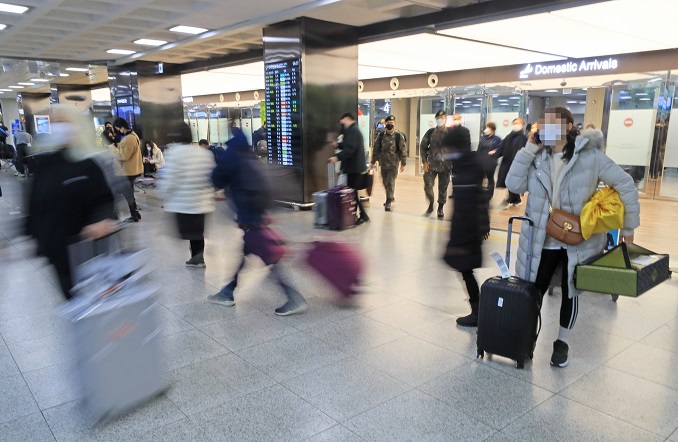 Travelers arrive at Jeju International Airport on Jeju Island on Jan. 28, 2022, ahead of the extended Lunar New Year holiday. (Yonhap)

“I can’t give up on visiting my old parents during the holiday. I plan to stay in my hometown and come back while carefully following the quarantine rules,” said a 55-year-old man surnamed Lee, who boarded a train at Daejeon Station in the central city.

A 25-year-old woman surnamed Choi, who took a Busan-bound train at Suwon Station, 46 kilometers south of Seoul, on Friday, said, “I was hesitant about holiday travel but eventually decided to visit my hometown of Busan as it is more dangerous to stay in the metropolitan area.”

Friday tickets for trains on the Honam and Gyeongbu lines passing through Osong Station in the central city of Cheongju were sold out, while all tickets for KTX trains from Seoul to Gangneung on the east coast are sold out until Sunday.

Domestic airports in Seoul, Busan and the southern resort island of Jeju are also crowded with homecoming people and travelers.

Tourism officials estimate that about 207,000 tourists will visit Jeju during the extended holiday, marking an on-year rise of over 35 percent.