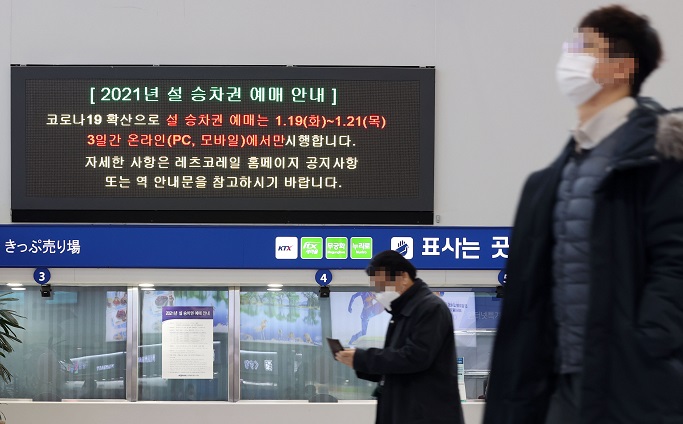 A sign above a ticket booth at Seoul Station gives instructions on booking train tickets for the Lunar New Year holiday, on Jan. 21, 2021. (Yonhap)

With the holiday two weeks away, daily coronavirus infections are down to the 300s from a peak of 1,241 on Dec. 25.

Health authorities have warned it is too early for people to let their guard down and maintained a ban on private gatherings of five or more until the end of this month.

Still, some say they are hopeful the ban will be lifted by the time the three-day holiday begins Feb. 11.

“I’m not too worried because we’ve all just been going back and forth between home and work, but if the ban is extended, I’ll have to think about canceling the trip.” 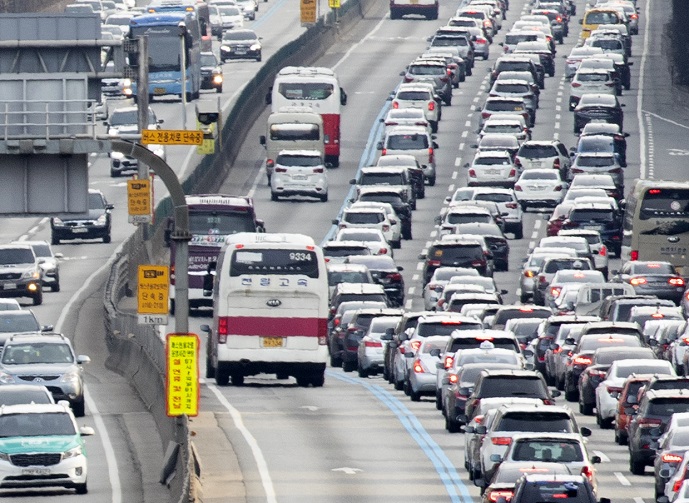 In this file photo, a long queue of vehicles moves at a snail’s pace on both sides of the Gyeongbu Expressway on Jan. 26, 2020, as many hit the road to celebrate the Lunar New Year holiday. (Yonhap)

The government has said it is reviewing whether to extend the restriction, which has been in place in varying degrees in different parts of the country since shortly before Christmas.

Separately, the government has designated Feb. 1-14 as a special antivirus period around the Lunar New Year, during which it is looking into charging toll fees on highways to discourage travel.

Before the pandemic, the government made highways toll free during Lunar New Year’s Day and the fall harvest Chuseok holiday as part of efforts to promote traveling and domestic consumption.

The special period will see highway service areas ban dining in and offer only takeout. Train tickets will only be sold for window seats, and ferries will limit passengers to 50 percent capacity.

“I’m thinking about going on a three-day trip to Jeju Island with my family over the Lunar New Year holiday,” a 26-year-old resident of Gimpo, just west of Seoul, said.

“I was going to postpone traveling when the new case numbers were over 1,000, but the numbers have recently gone down a lot and most people are good with social distancing, so I think it will be OK if we maintain personal hygiene.”

A family in Yeongdeungpo Ward, western Seoul, said they changed their travel plans from Jeju to some place accessible by car, in consideration of the pandemic.

“The entire family is only four people, which is below the five-person threshold, and we plan to drive our own car, so there shouldn’t be a big issue in terms of social distancing,” a 26-year-old member of the family said. 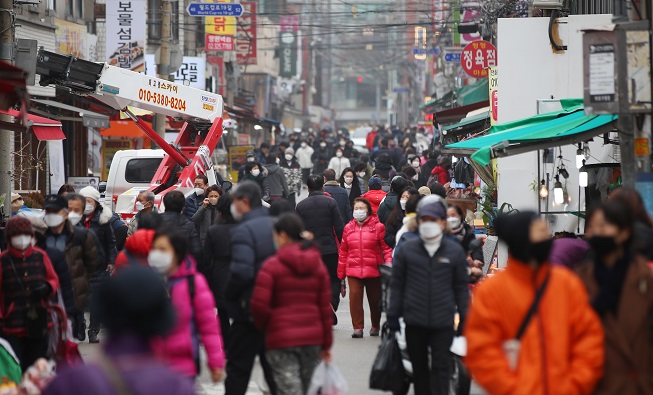 A traditional market area in western Seoul is crowded on Jan. 22, 2021, with two weeks to go until the Lunar New Year holiday. (Yonhap)

The growing demand for travel has been felt in the hospitality sector.

Glamping reservations were also up, with one business in Pocheon, 46 kilometers northeast of Seoul, at 90 percent capacity during the holiday period and another business in southeastern Cheongdo County at nearly 70 percent.

Health experts continued to urge caution, saying all gatherings should be shunned as much as possible.

“The number of new cases may be going down, but they are still in several hundreds,” Lee Jae-gap, an infectious diseases doctor at Hallym University Medical Center, said.

“Whether it’s with family or under five people, there should be no gatherings at all during this Lunar New Year,” he said, adding that senior citizens are particularly at risk, with the virus especially active during winter when many people stay indoors.