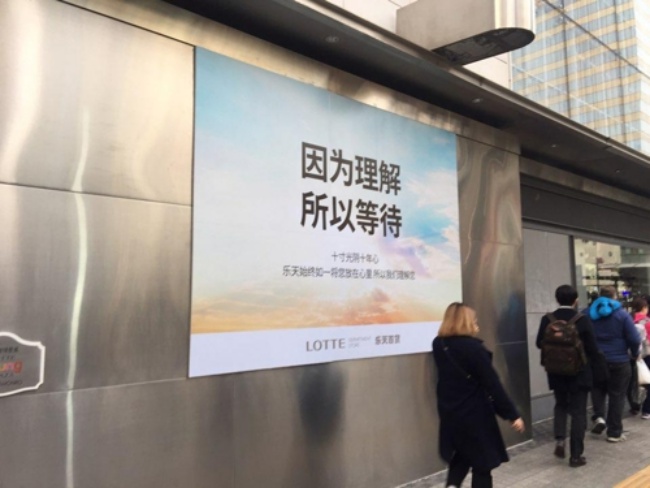 A poster which reads “We understand so we wait,” in Chinese was put up at a Lotte Department Store. (Image: Yonhap)

SEOUL, March 28 (Korea Bizwire) – As desperate times call for desperate measures, South Korean conglomerate Lotte is doubling down on its all-out efforts to pander to the Chinese market after 87 Lotte Mart stores were shut down by the Chinese government.

Lotte’s unexpected move to send its Chinese consumers a message of understanding and humility is the latest in a series of attempts to win back the hearts of millions of consumers in one of its biggest markets.

In fear of further retaliation by the Chinese government, high-level positions were all given to Chinese employees in a bid to soften the blow by localizing the company and rebranding its image.

Plans are reportedly in the works to display posters with a Chinese friendly message even at stores that are temporarily closed, so as to appeal to passers-by.

From last Friday in South Korea, posters were put up at the main branch of Lotte Department Store in Myeong-Dong, one of the biggest shopping districts in Seoul, with a message which reads, “I understand you, therefore I wait,” in Chinese. 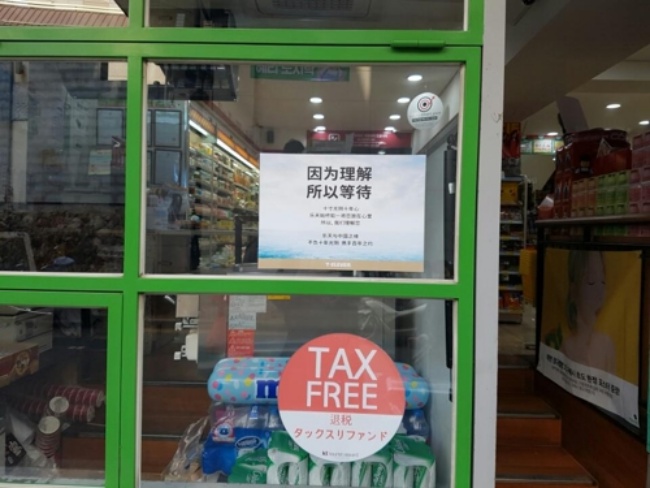 Another poster by Lotte was seen at a 7-Eleven store at the Chinese Embassy in Seoul. (Image: Yonhap)

While a Lotte spokesperson says the posters were created in the hopes of resolving the conflict between the two countries, critics believe it is Lotte’s last resort to appeal to independent Chinese tourists.

The company has been at the forefront of the conflict over South Korea’s deployment of an American THAAD missile defense system after it took a major hit from China’s politically-driven economic retaliation.

However, criticism against Lotte goes beyond Chinese borders, as the company is being accused by the public of passing itself off as a South Korean company.

After weeks of media coverage of a Lotte corruption scandal that shed light on the personal lives of the family members who own the company, most of the criticism centers around the fact that the owners of the company can’t even speak Korean properly, even though most of their profits are made in South Korea.

While Lotte finds itself in hot water, it also faces a conflict of interest across the sea in Japan.

Amid current political tension between the two countries over ‘comfort women’ statues, weeks of South Korean media coverage of the Lotte family’s national identity is not favorable for the company.

Against the growing backlash coming from all directions that forceasts another difficult year for Lotte, chairman Shin Dong-bin is nevertheless resilient.

Speaking in a desperate tone to the Wall Street Journal last week, the chairman disregarded growing rumors that the company is withdrawing its business altogether from China, saying, “I love China. We (Lotte) hope to continue our business in the country.”