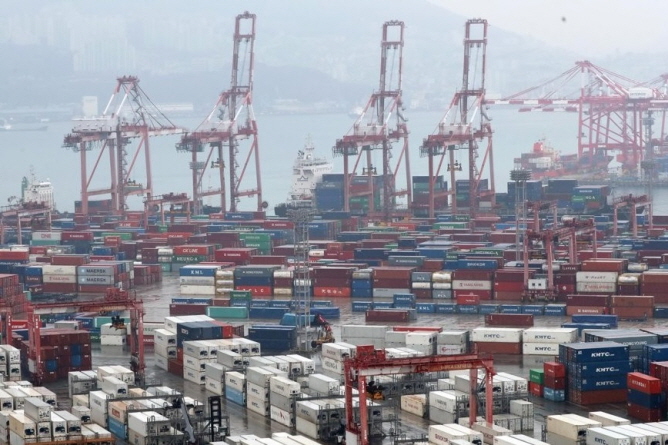 Combined overseas sales of the country’s top 100 firms by revenue totaled 146.3 trillion won (US$123 billion) in the April-June period, down 19.8 percent from a year earlier, according to the data from the Federation of Korean Industries.

The tumble marks a sharp turnaround from the first quarter, when their sales edged up 0.65 percent on-year to 170.4 trillion won as the impact of the COVID-19 outbreak was limited to China and the rest of Asia.

Companies in three key industries — electric and electronics, auto and auto parts, and energy and chemicals — were hit hard.

Electric and electronic companies suffered a 5.1 percent drop in their overseas sales, while those of auto and auto parts makers tumbled 36.5 percent.

The figure for energy and chemical makers also sank 31 percent due to falling refining margins and crude prices.

In particular, steelmakers registered the biggest drop of about 80 percent amid a tumble in overseas demand for steel sheets used in automobiles.

By region, overseas sales of the top 20 firms plunged 24 percent on-year in Asia in the second quarter, with their revenue falling 12.6 percent and 11.2 percent in the Americas and Europe, respectively.

Yet the top five businesses — Samsung Electronics, Hyundai Motor, LG Electronics, SK hynix and Hyundai Mobis — saw their sales in China rise between about 6 percent and 20 percent from three months earlier thanks to China’s stimulus measures, according to the data.