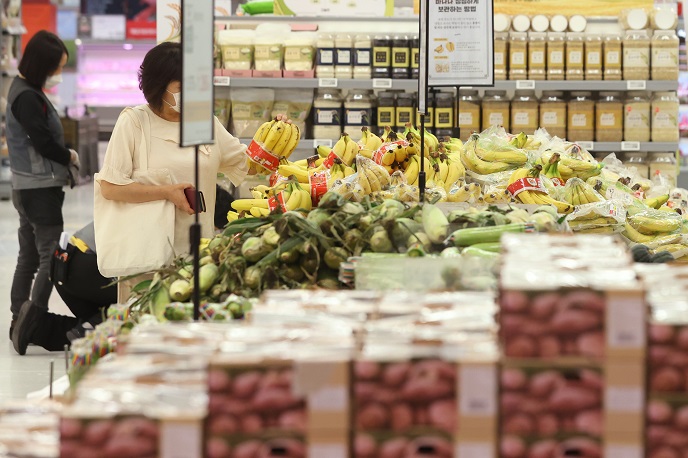 People shop for groceries at a discount chain store in Seoul on July 4, 2022, amid high inflation. (Yonhap)

SEOUL, Sept. 28 (Korea Bizwire) — Close to 6 in 10 South Koreans are planning to cut back on spending for the latter part of this year due to skyrocketing prices and soaring interest rates, a poll showed Tuesday.

The Federation of Korean Industries conducted a nationwide survey of some 1,000 South Koreans over 18 years of age, in which 59.7 percent said they have plans to cut back on expenditures for the latter part of this year.

It was estimated that spending will shrink by an average of 3.6 percent.

Spending on travel, outdoor dining, and accommodation (20.4 percent), automobiles and electronics (15 percent), and clothes and shoes (13.7 percent) is expected to shrink for the latter part of this year.

In contrast, spending on food and beverages (28.4 percent), rent and other housing bills (18.8 percent), and essential goods and cosmetics (11.5 percent) is expected to jump in the latter part of this year.

At 53.1 percent, more than half of the respondents said they were without the financial means to carry out their consumption plans in the latter part of this year, while 15.1 percent said their financial circumstances were dire.

Asked when consumption will recover, 46.8 percent pointed to next year, while 25.2 percent said ‘after 2024’ and 20.4 percent said the situation was unpredictable.