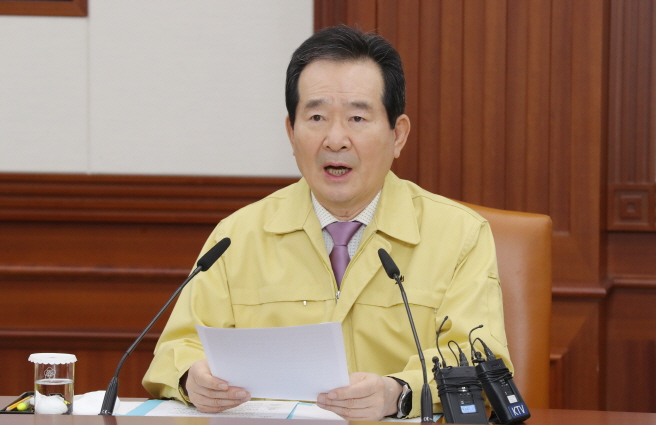 Prime Minister Chung Sye-kyun speaks during a session of the Central Disaster Safety Countermeasures Headquarters at the government complex in Seoul on March 22, 2020. (Yonhap)

Most churches tried to comply with infection prevention guidelines, such as wearing masks and keeping a certain distance between worshipers, but raised the ire of quarantine officials focusing on a stepped-up social distancing campaign.

Amid the defiant religious services, Prime Minister Chung Sye-kyun warned of a “stern” legal action against any breach of the government’s quarantine guidelines or orders — in his latest plea to rally public support for the anti-virus efforts.

“There can’t be tolerance any more when it comes to acts that impede the government’s quarantine efforts and do harm to our community,” Chung said during a session of the Central Disaster Safety Countermeasures Headquarters.

“We should take stern legal action, such as punishing those who breach the (quarantine-related order),” he added.

The premier also stressed the need to focus on enforcing the government-recommended suspension of the operation of religious, indoor sports and entertainment facilities for 15 days until April 5.

Earlier in the day, Culture Minister Park Yang-woo renewed an appeal for religious circles to “actively” join the social distancing efforts, during his visit to Youngnak Presbyterian Church in central Seoul.

“I make this earnest call for the religious sector to actively partake in this measure based on the understanding that this is an inevitable step to protect the life and safety (of citizens), though the recommended social distance measure is difficult,” Park told church officials.

“I also would like to extend my deep gratitude for the Korean churches’ best efforts to prevent COVID-19 by turning services into online ones,” he added.

South Korea had reported 8,897 confirmed cases of COVID-19 as of midnight with 80.9 percent of them considered mass infections, according to the Korea Centers for Disease Control and Prevention.

A total of 104 people have died from the virus.

Despite the government’s call for restraint, many churches, including some nearly 540 churches in the southeastern city of Busan, have held their weekend services with their masked members singing hymns and saying prayers in close proximity to one another, raising fears that they could cause an increase in cluster infections. 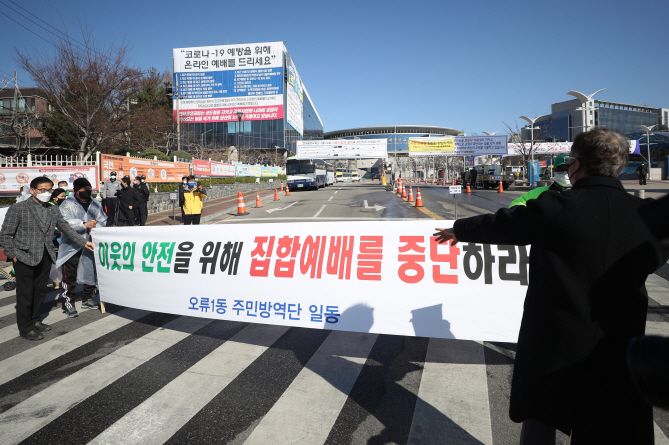 Residents of the Oryu-1 neighborhood in southwestern Seoul hold a protest rally in front of a Protestant church in their neighborhood that went ahead with a Sunday service on March 22, 2020. (Yonhap)

Among the defiant churches was Sarang Jeil Church in northern Seoul.

Its members entered a Sunday morning service after being checked for fever and identifying themselves on the church’s visitors’ book. Some squabbled with municipal officials deployed to the church premises to check the situation.

A Seoul city official pointed out that the church failed to adhere to the guideline of maintaining a distance between worshipers during the service as the chamber was crowded.

“We requested that the breach be addressed, and we will consider issuing an administrative order banning such a gathering if (the church) continues to flout that guideline,” the official said.

Other churches also conducted their routine weekend services, though they tried to strictly comply with state-recommended containment guidelines.

Their members stepped into the main chambers after sanitizing their hands and checking body temperatures.

Only registered members were admitted into the chapels, with the entrances plastered with a blunt warning: “One that provides a source of COVID-19 infection could face legal responsibility.”

During the unusually muted services, the members sat one or two meters away from one another, with the stages, once replete with devout choir members, emptied out.

Before the services, some churches sent out a notice that they would not provide any lunch or transportation services “until the COVID-19 situation calms down.”

In line with the government recommendations, many other churches held online services, using their own broadcasting systems or such global platforms as YouTube.

Some large churches created a fund for cash-strapped churches that have been struggling to fund online services and pay rental fees amid declining membership.