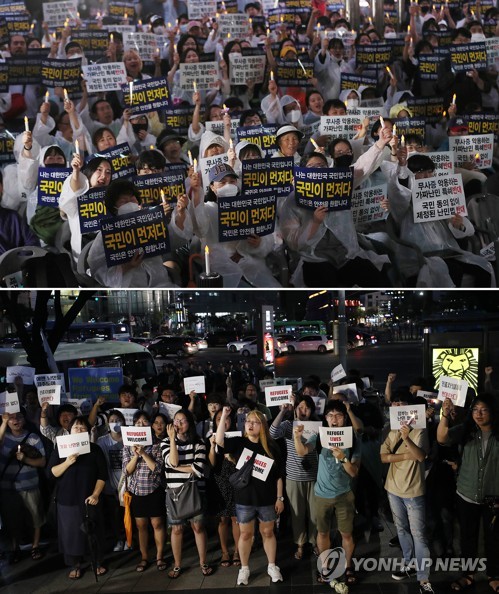 The combined photo shows two rallies held by groups of protesters and supporters of refugees arriving in South Korea, in Seoul on June 30, 2018. (Image courtesy of Yonhap)

SEOUL, June 30 (Korea Bizwire) – Two separate rallies were held in central Seoul late Saturday with supporters and protesters from each side showing contrasting sentiment regarding hundreds of Yemini asylum seekers in the southern island of Jeju.

A group of protesters, who named themselves People’s Solidarity Against Illegal Asylum Seekers, staged a rally in Gwanghwamun Plaza, calling for government measures to fend off “fake refugees.”

“We do not reject those who seek asylum for religious, political and racial reasons,” one of the participants said. “We want to see a system that screens out migrants who take advantage of the asylum program for their own economic gains.”

The group also called on the justice ministry to supplement the current policy regarding asylum seekers in a way that can really benefit those in need.

The participants, of various age groups, joined the rally after registering online at a website recently created for the launch of the rally by an anonymous activist citizen.

They chanted, “Our people first!,” “We want safety,” “Abolish no-visa policy,” and “For whom does this country exist?”

Not far from the protesters’ rally, another group of people crowded to hold a rally in support of asylum seekers. They called for allowing Yemeni refugees in Jeju into the country and for more tolerance toward people seeking asylum for humanitarian reasons.

“Those who oppose (refugees) say they want safety and yet all they do is incite hatred,” the group said.

Police bolstered forces around the area but no clashes broke out.

More than 500 Yemeni asylum seekers arrived in Jeju under a no-visa program aimed at promoting tourism. Their entry has sparked worries that many of them could be bogus claimants seeking jobs and other economic advantages, that similar arrivals could follow, and their presence could lead to increases in crime and other social problems.

The government has banned the Yemeni asylum seekers from leaving the island for other parts of South Korea, and added the Middle Eastern nation to a list of countries whose nationals cannot enter Jeju without a visa.

The Justice Ministry said Friday it will seek to revise the Refugee Act to prevent fake asylum seekers from abusing the system.