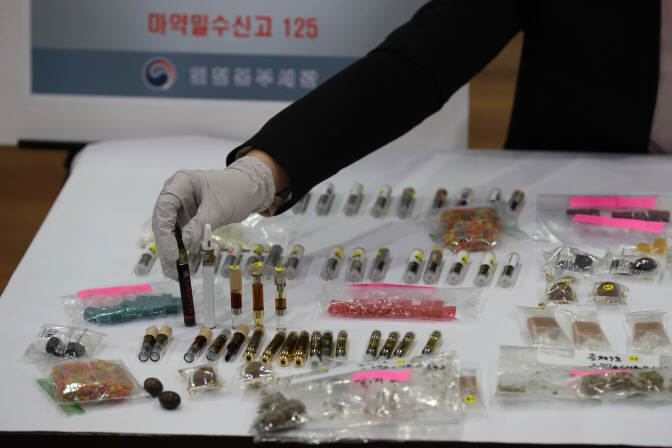 The narcotics came in various shapes and sizes, from e-cigarettes to oils, cookies, chocolate, and jellies. (Yonhap)

SEOUL, May 28 (Korea Bizwire) — More travelers are attempting to bring drugs into South Korea following the legalization of marijuana in Canada and the United States, customs agency said Wednesday.

The Korea Customs Service announced that there were 313 cases of drug smuggling, carried in small quantities by individuals last year, which was five times more than in 2018 (58 cases).

This year, there were 222 drug cases discovered as of April. Despite the coronavirus that put a stop to international travel, drugs are still being discovered.

There were a total of 661 cases of drugs found at customs last year, and 350 cases this year between January and April. The weight of the drugs discovered came to 489 kilograms.

The narcotics came in various shapes and sizes, from e-cigarettes to oils, cookies, chocolate, and jellies.

In the last two or three years, distribution of marijuana began in earnest in Canada and some parts of the United States after legislation was passed legalizing their use.

Along with drugs, attempts to traffic illegal weaponry is also on the rise. Last year, there were 3,102 cases of illegal weapons found during customs, accounting for 12.4 percent of 14,559 unsafe items found that year.

This year, there were 733 cases of illegal weapons found as of last month, accounting for 15.9 percent of all unsafe items found so far.

Among 19,175 items listed as ‘not safe’ found between last year and April of this year, 13,831 were not certified to meet safety regulations and were stopped at customs.