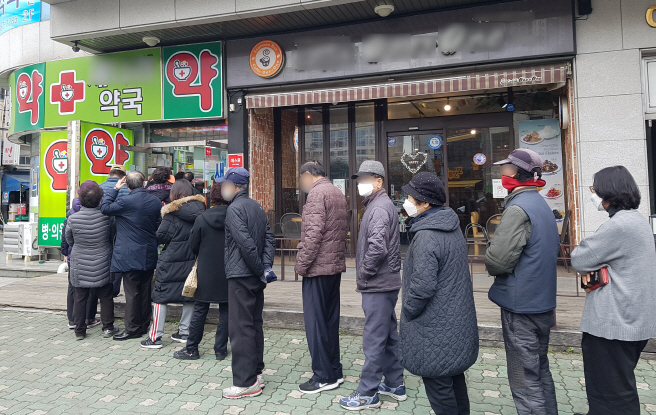 People wait in a line to buy masks at a pharmacy in the southeastern port city of Busan on March 9, 2020, the first day of the government’s new mask rationing system. (Yonhap)

SEOUL/DAEGU, March 9 (Korea Bizwire) — South Korea on Monday launched a mask rationing system aimed at stabilizing supply amid the coronavirus outbreak, but confusion was reported in some areas as consumers adjusted to the new system.

Under the measure that took effect earlier in the day, citizens can only buy up to two protective masks per week from pharmacies, on designated days of the week, depending on the final digit of their year of birth.

Public frustration has built up due to a mask supply crunch, triggered by growing demand for the protective wear as well as excessive price surges and hoarding by some sellers and consumers.

On the first day of the system, confusion was reported in several areas as both the public and pharmacies adjusted to the rationing program, which supplies up to 250 masks to each pharmacy on a daily basis.

In Daegu, which has been most hit by the contagious virus, elderly citizens voiced frustration after visiting pharmacies on the wrong day of the week.

“(The pharmacist) told me to come on Wednesday since my birth year ends in eight,” said a Daegu resident in her seventies, “My son told me not to leave the house since it’s dangerous, so it’s inconvenient that I would have to visit again.”

Under the new system, those born in years ending in one and six can buy masks on Mondays, two and seven on Tuesdays, three and eight on Wednesday, four and nine on Thursdays and five and zero on Fridays.

Those who didn’t buy masks on weekdays can get them on weekends.

“We started selling masks at 8 a.m. and they sold out. Around 10 to 20 percent of customers had to leave empty-handed since they came on the wrong day. Most of them were elderly,” said a pharmacist at Seoul’s Seodaemun Ward.

Some parents who visited pharmacies to buy masks for children also voiced frustration.

“I have three kids whose last digit of birth are all different. This means that I have to visit the pharmacy on three different days,” said a father in his thirties, “It’d be better if I could buy them at once.” 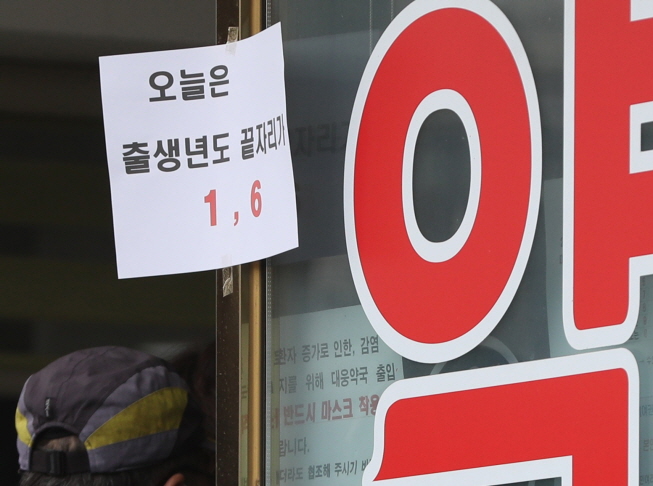 A notice on the government’s mask rationing system is seen at a pharmacy in the southern city of Ulsan on March 9, 2020. (Yonhap)

For those 10 years or younger or 80 years or older, family members can purchase the masks on their behalf when submitting their identification cards with government-issued housing resident registers.

But in line with the system policy, family members can only purchase the masks on the day of the person’s birth year falls on.

Meanwhile, some have said there needs to be a system that does not require queuing.

“There was a long line in front of the pharmacy as usual. If masks continue to be distributed on a first-come, first-served basis, it will be difficult for people who are working to get them,” said a 29-year-old resident who lives in Seoul’s Gwanak Ward.

The Ministry of Food and Drug Safety said it supplied around 7 million masks through public channels on Monday, including 5.6 million that were distributed through nationwide pharmacies.

A total of 500,000 were sent to Daegu and North Gyeongsang Province, which have been hit hardest by the contagious virus, while another 593,000 were distributed to medical facilities.

The remainder were distributed through local post offices and supermarkets run by a farm cooperative.

The mask rationing system is the latest in Seoul’s efforts to better fight the COVID-19 virus. The country has reported 7,478 infections since its first confirmed case on Jan. 20.